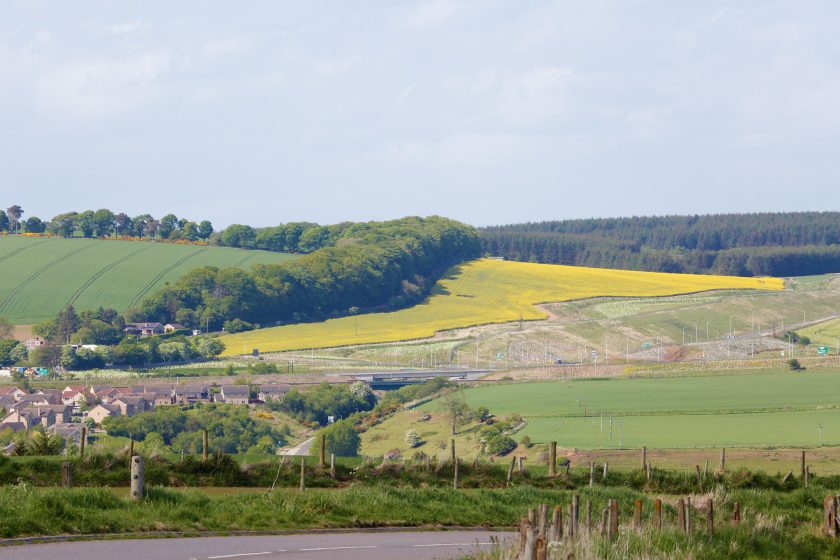 A PROPOSED road at Ury Estate, provoking strong opposition from residents and which will see the loss of ancient woodland, has been given the go-ahead by the Scottish Government’s Appeal Unit.

Kirkwood Homes Ltd have been successful in their appeal against the local authority’s refusal of permission for their East Lodge link road.

This proposed layout will bring a new approach to town for motorists on the B979. Traffic will cut through the Polbare tree belt and continue downhill and slightly westwards before joining with the east link road at a give way junction west of the lodge.

The existing Netherley road would be blocked to traffic by bollards and become a shared footpath and cycleway. It will also provide gated access to farm vehicles unable to use the new layout.

A Road Layout Already Has Permission

In his decision letter, Trevor A Croft, the Reporter appointed by the Scottish Ministers, makes many references to a road layout Aberdeenshire Council approved in 2014.

In it, a new road just to the west of the East Lodge would take traffic from the estate north and pass through the Polbare tree belt to join the Netherley Road some 750 metres north of the lodge.

The existing east entrance would then be closed meaning residents would have to drive an additional 1.5k to enter the estate.

In effect, many of the objections to the latest proposals, were discounted because of this road scheme, which would have an equal or more detrimental effect than the design he was considering.

Mr Croft refers to the 106 trees, mostly mature beech, that will be felled to build the new road and the ‘significant visual impact’ this will have on the Polbare Belt.

He states: ”Taken on its own this is a substantial argument for dismissing the appeal.

”Account must be taken however of the extant planning permission which would almost certainly have a greater adverse landscape impact.”

There is compensatory planting of 1,120 trees and 345 shrubs included in the newer proposals – there is none in the existing permission.

Many of the 39 objections made to the new road layout were from Ury Esate residents fearing an increase in traffic along their road – with some branding the proposed new route a rat-run.

However Mr Croft refers the estate masterplan produced in 2014 which shows a link road.

And he states: ”In these circumstances I do not see the proposed road making such a difference from that already consented as to have an impact on residential amenity that would be likely to be significant.”

Mr Croft acknowledges Sluie Estate’s objection to the road layout regarding access for large agricultural vehicles. But he determines it is to be down to Kirkwood Homes working with the council and landowner to ensure that a viable working solution operates.

”Importantly it will have less adverse environmental impact than the existing consented roads proposal.

”I have considered all the other matters raised, but there are none which would lead me to alter my conclusions.”

Great news. Hopefully this will help Stonehaven move forward. The low cost housing and a decent supermarket being built by FM Ury will be welcomed.