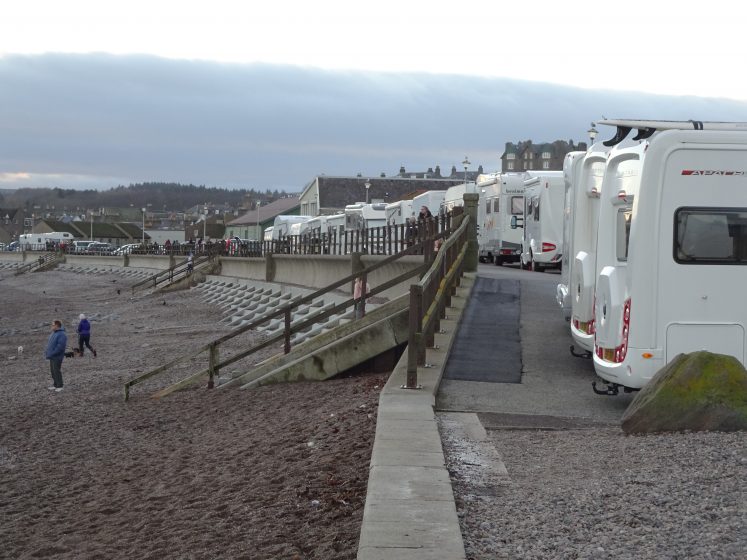 STONEHAVEN Community Council is to reach out to Cowie residents to find out their views on parking restrictions at the entrance to the village.

Congestion in the area, caused by a combination of campervans and caravans queuing to enter the campsite together with parked cars and mobile homes, has become a matter of concern for the community council.

At their August meeting, fears of a perfect storm scenario were aired – when a blocked road prevented emergency access to the village. Mike Duncan called for double yellow lines to be installed behind the pool – without the traffic monitoring that would normally be undertaken first.

And at Tuesday night’s Skype meeting, acting area manager Bruce Stewart told members he had been in touch with the local roads team, who have indicated measures could be taken on a more temporary basis

”But this would probably involve using more cones,” he said.

This brought a chorus of ‘no’ from members.

Mr Stewart said SDCC were entitled to contact the roads team and request action, and he would facilitate this. But he had words of caution.

”I would advise some sort of public consultation,” he said.

”The residents of Cowie feel that could push car parking back down towards them.”

Councillor Sarah Dickinson echoed Mr Stewart’s advice, saying parking had become an enormous issue for them since the opening of the AWPR.

”Speak to the residents,” she said. ”Where does the balance lie with them? Let them decide.”

Councillor Dennis Robertson later added any temporary measure could be trialled for a period of time to allow it to be monitored.

With Jim Stephen pushing for action on the matter, saying nothing had happened in over two years, it was agreed Mike Duncan would initiate contact with Cowie residents, through a former member of the Community Council, Allan Sutherland.

I raised my concerns on 19th July with the Community Council and also contacted Mearns Leader and forwarded some photos. I was contacted by Raymond Christie about my concerns I am glad to see that this has been put on the agenda as this is an accident waiting to happen.