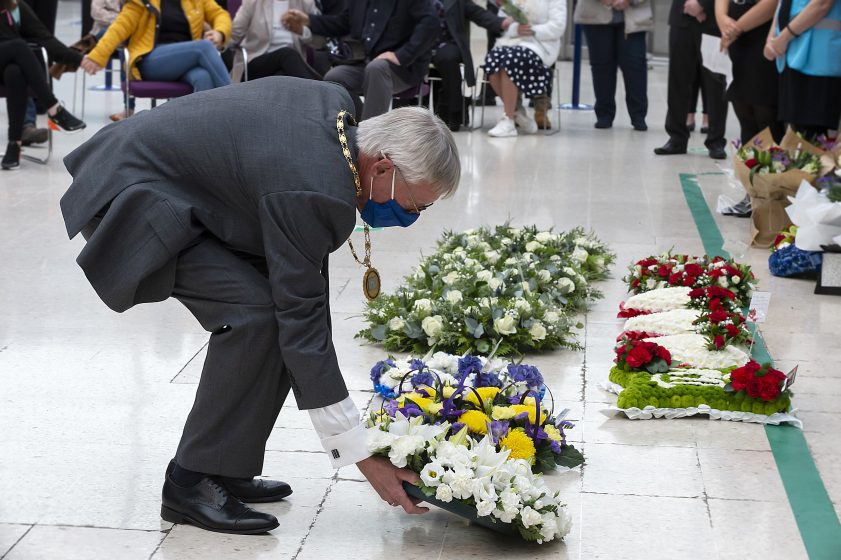 Provost of Aberdeenshire, Councillor Bill Howatson, has praised the work of the Rapid Response Team and the efforts of the wider community for their support of the emergency responders in the aftermath of last week’s tragic train derailment near Stonehaven.

The Provost’s comments came after he laid a wreath at Aberdeen Railway Station and joined the nation in observing a minute’s silence yesterday (Wed, Aug 19) at 9.43am in memory of the three victims.

Provost Howatson – who represents the Mearns area – said: “It was an honour to attend today’s poignant ceremony to pay tribute to the three men who died so tragically last week.

“As a nation we stood shoulder to shoulder to pay our respects and pass our condolences to the families and friends of driver Brett McCullogh, conductor Donald Dinnie and passenger Christopher Stuchbery.”

On behalf of Aberdeenshire Council, Provost Howatson went on to thank members of the Rapid Response Team and the wider community for their compassionate support of the emergency responders who were thrust into the most difficult and trying circumstances imaginable on Wednesday.

He said: “Demonstrating their core values of care and compassion, these volunteers from the Rapid Response Team were quickly on the scene and have continued to play a vital role in supporting our emergency crews.

“Not only did they serve up essential hot food and refreshments throughout the emergency operation, they also provided words of comfort and support to those who were dealing with the traumatic aftermath of the crash.

“These dedicated volunteers have also remained on site over the weekend to support the various services who continue to inspect the scene, and I know I speak for all those who were kept nourished over these past few days, that this support has been gratefully received.

“Of course, our own communities have also rallied at this painful time. We have heard heart-warming stories of local businesses donating food and preparing meals, while local sports and community groups were on hand to help serve those at the site.

“This response at such a tragic time demonstrates a very real community spirit for which I thank you all personally and for which you must all be applauded.”