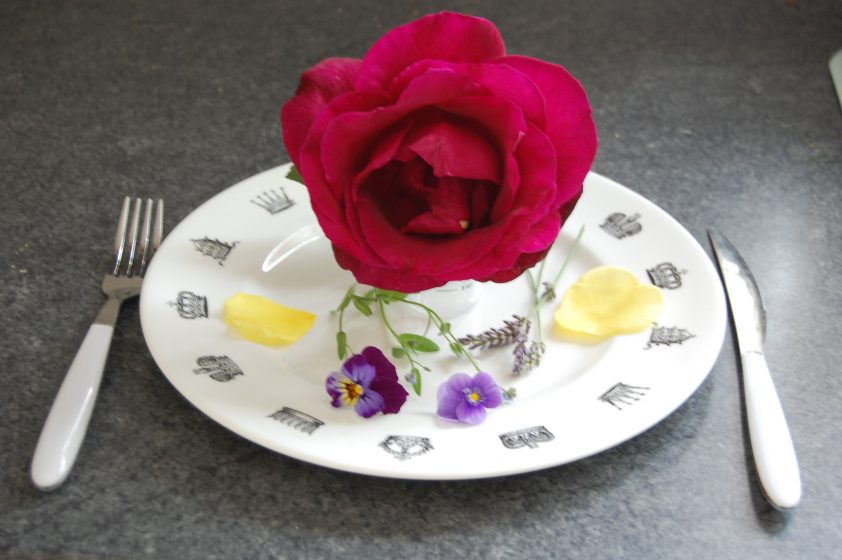 Some have been “digging for victory” for more than 80 years, and many of us have been spurred on sharply by Covid-19.

I knew some original victory diggers, who had turned their gardening skills and their neat lawns over to growing fruit and vegetables, all to bolster self-sufficiency and support their community during and after WWII. They were urged by the British Government, through stirring posters, broadcasts and even a song, and behind that patriotic and practical campaign was a man who went to school in Aberdeen, up the road from my garden. Professor John Raeburn (1912-2006) led agricultural planning in the Ministry of Food. One of his abiding criticisms was reliance on food imports and he walked the talk, using his own garden produce to feed his family. However, the UK’s food importing gathered pace in peacetime and now we import nearly half the food we consume, according to the latest official figures.

Up to this year, my garden was a site for dabbling, with a pair of miniscule (I miscalculated the root stock when ordering) apple trees – Lord Lambourne and Merton Worcester varieties – a few potatoes, a small strawberry bed and some peas. Then everything changed for everyone, but we all still needed to eat. By luck, this year’s seed potatoes, all 14 of them, were obtained the day before almost all UK businesses were told to close. Food shops stayed open, but they ran out of goods quickly while initially unheralded people continued to grow, pick, pack and deliver produce.

For most of us, the prospect of ‘growing your own’ with no advance warning was a towering challenge. This was exacerbated with the question of where to buy seeds, plants, soil, manure, timber, wire, well, the lot.

I was always drawn to the idea of growing vegetables and fruit and cheerfully bought seed packets every year, but somehow never got round to bringing them on as seedlings, let alone plants. Sometimes, momentum was kept up, only to be discouraged by a harvest of radishes, small and hard as marbles, and leeks, thin and succulent as willow whips. You shouldn’t blame your tools, but I do: under the topsoil is compacted clay; in a decade, our compost bin has composted by about half an inch per year and the composting worms I ordered fled the bin the day they were delivered; the land is on a hill and a popular route for strong and chilly winds. When I bought a plastic greenhouse for tomatoes, a gale picked it up and converted it into bundle of shreds and broken poles. Another wind dealt with a well-weighted cold frame.  Two raised beds for potatoes diminished to one after its twin became a rectangular swamp, courtesy of the vigorous rain and enduring clay. The North East is renowned for its many tattie farms and I’d read that up to the 1980s, schools closed for the October “tattie holidays” for children to work on farms as “tattie-howkers”. Older residents assured me anyone could grow tatties here, but were silent on their techniques for a bumper yield. The remaining raised bed supplied enough potatoes for a dozen light meals, and each tattie was delicious, the apple trees produced as many apples – firm and tasty – as months in the year,  and, as long as I cross-stitched the pea shoots onto their frame, they yielded at least three handfuls.

But this year, with no time to transform my clay pan into the Nile delta, or change weather patterns, I needed a new garden. Could I rent one? An allotment, officially 2,690 sq. feet down to a tiny fraction of that size, is privately or council-owned and together they form eccentric, colourful clusters all around Britain.

My surge of excitement was quickly blocked because Stonehaven has one allotment ground and that looks pretty well occupied. Under Covid regulations, we were not supposed to travel unnecessarily, so renting a patch miles away was out of the question. I pass the ground every day, tucked into the curve of the Cowie river. For many years, the ground was only used by dogs and tug-o’-war teams. The teams’ practice sessions were signalled by the arrival of a tall, gibbet-like apparatus on wheels, the wooden training rig, and muscly men would practice their pulling, heaving, shouting and digging their heels into the grass skills in preparation for competing in the many highland games which, up to this year, were a stellar feature of the Scottish calendar.  About ten years ago, someone may have worked out that big strapping lads can pull ropes on any stretch of land and the allotments were established. Peering through the protective beech hedge, I see each plot is well-ordered and impressively  productive, from cabbages to fruit trees, from asparagus to raspberries. These are serious gardeners. They have tidy, raked beds full of promising tilth. I took my soil envy home and considered my options.

Behold, a work of art and it’s edible. I have discovered there is a rainbow of flowers you can eat. Now that is something I can manage. Fed by the soil from bought plants, by my haphazard scatterings of dried chicken manure and by the fresh guano gifted by the blackbirds, sparrows, robins and starlings who constantly patrol the garden for spiders, bugs, worms and grubs, I can grow roses, honeysuckle, peppery nasturtiums, pansies, forget-me-nots which rampage between the paving stones, and are available now (once thoroughly cleaned) for salads and there are cornflowers and sunflowers to come. Bon appetit!

After a career in broadcast journalism and corporate communications, Marka is now a member of Mearns Writers, and has won prizes in poetry and fiction and had her short plays staged. Last year, she performed at the Granite Noir crime festival and, in Doric, at the Stonehaven Folk Festival.