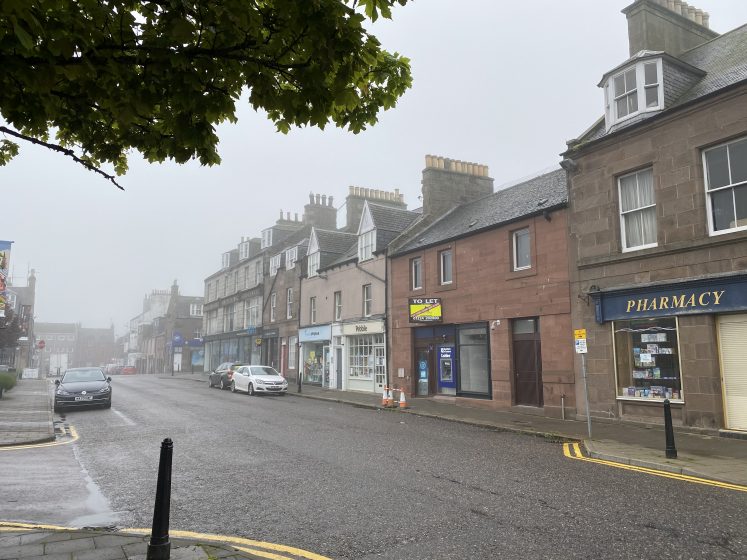 And our beachfront businesses could be corralled by water-filled barriers like those on the Bervie Braes – again to give more pavement room for social distancing.

The plan below shows what is on the cards, with work intended to start at the beginning of July for implementation on Friday July 3. A 20mph speed restriction would also be introduced.

Because of the high footfall at the seafront businesses on Beach Road, the roads service are putting measures in place there too.

A priority traffic system would also be introduced, with vehicles entering from the north having priority over vehicles travelling north.

Similar temporary measures across the Shire

The local authority announced at the end of last week it had been successful in its £310,000 project bid ”to ensure people are able to safely access services in town centres while maintaining physical distancing”.

The funding will cover 100% of the cost of temporary infrastructure projects, such as the proposals for Stonehaven, in the Shire’s six largest town centres – Banchory, Ellon, Fraserburgh, Inverurie, Peterhead and Stonehaven.

There has been a rushed consultation on the proposals, which ends tomorrow. Various stakeholders, including the Business Association and the Stonehaven Town Partnership were invited to a Skype conference last Wednesday.

Our Business Association have posted the proposals on their Facebook page and are asking people to comment.

Cllr Wendy Agnew said the measures would not go ahead if people were not happy with them. She said she thought the proposals were a knee jerk reaction by Aberdeenshire Council and would quickly become unnecessary as social distancing measures are reduced.

And she said she was not happy about the impact they would have on the town centre.

”If you ruin the businesses you have no town centre,” she said, ”Where are all the displaced cars going to go? What about disabled people? It is just crazy.”

Cllr Sarah Dickinson said the temporary measures were aimed at providing safe access and safe social distancing. But she echoed Mrs Agnew’s reassurance they would not be imposed upon the town if they were not what people wanted.

She said: ”Not all the shops are open. When they do open, people will be required to queue. So queueing will increase.

”So the intention is to widen the pavements. But obviously that is on-street parking, which is residents parking and there are issues around deliveries that will need to be bottomed out.

”And if the community really don’t want it, then it won’t be implemented.”

If you would like your comments on the proposals to be noted, please email the Roads Department on Kincardineandmearns.roads@aberdeenshire.gov.uk

We have tried to support our local shops during the pandemic and they have been sterling in supporting us throughout. These intended measures are (a) unnecessary, (b) patronising to residents, (c)detrimental to the shops we want to help prosper.

What are they thinking of who on earth thought up this obviously don’t live in Stonehaven. This will just kill the town centre if they put this in place .

What an utter waste of the public purse yet again, and how to ruin the town centre both practically and visually, more of those obscene red and white bollards like Bervie Braes !!!
I’ll bet the car park would no longer be free if this happened, also how would the towns people with mobility issues manage to give custom to local shops? How would deliveries be made without obstructing the roads? Stonehaven just cannot be cordoned off in this way, everyone has managed perfectly well to give their custom to local shops for the past 3 months, myself included and certainly never felt the need to be corralled along the pavement by ugly bollards.
How about spending this grant in fixing the damned potholes that litter the roads, and cut the grass, many junctions are now dangerous on the outskirts due to overgrown grasses and weeds. I totally disagree with this absurd idea and waste of funds that could be used much more efficiently.

Remove the cars from the town square and allow outdoor cafes and seating for pedestrians ,cyclists instead. Return the car park to a green space that enhances our environment and economy.In Lithuania with narrow streets in the capital Vilnius public spaces are being given over to cafe,bar,restaurants that wish to have outdoor tables.Let us have some of this green infrastructure we have been promised for so long .

This beggars belief! I cannot believe that anyone would think this is a good idea! All these weeks and the council have done next to nothing to keep the town in good order and now when things are improving they come up with this! Idiotic!!!!!

I’m all for pedestrianising the square on a permanent basis and not just for market days but to decorate the town centre with those ugly cones and barriers would be horrendous surely we want to enhance the look of the town not make it look like a building site.

The majority of Stonehaven people have taken social distancing seriously and have enough common sense to continue this until it becomes unnecessary so cones etc. are really not needed. Those who do NOT follow distancing guidelines are the idiots who take no notice of any measures suggested for their safety. This includes parking [or lack of ] The few who ignore double yellow lines are unlikely to be put off by a few cones
The only reasonable suggestion is a 20 mph speed linmit around the town centre