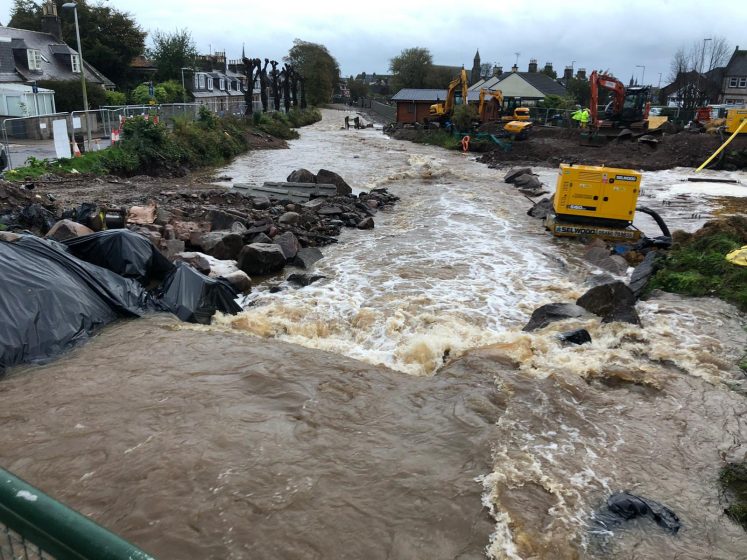 PREPARATORY works have resumed on the Stonehaven Flood Protection Scheme.

Contractors McLaughlin and Harvey Ltd – who first began construction back in March last year – came off site in March following Scottish Government advice on construction sites in light of the COVID-19 pandemic.

Aberdeenshire Council’s principal engineer for major projects, Rachel Kennedy, said: “The contractors will initially be bringing a small number of personnel onto the site who will be erecting signage and making adaptations to welfare units and offices.

“In due course, additional personnel will join them to restart the pumping equipment on site and to make general site preparations to enable construction works to commence as the Scottish Government phases permit.”

Works on the scheme – which is designed to protect homes and businesses which have previously been badly affected by flooding events around the River Carron – was expected to be completed late spring next year, however timescales will have to be revised.

The level of protection the Stonehaven Flood Protection Scheme will provide is well above the current standard required by the Association of British Insurers and will reduce the flood risk to 372 residential properties, two public utility sites, a school and an emergency service site.

Ms Kennedy said: “Once completed, the Stonehaven Flood Protection Scheme will provide a 0.5% chance of occurrence standard of protection or a 1 in 200-year flood event.

“It will also include an allowance for climate change – a 33% increase to 2080 – and a safety margin catering for uncertainties.”
Within the scheme, the major works have included construction of walls, embankments, culverts and alterations to five bridges along the Carron Water and its tributaries as they pass through Stonehaven.

Since the works began in March last year, Ms Kennedy says the communities affected by the various elements of the scheme had been very understanding.

She said: “We understand that this scheme has had a major impact on the lives of many residents and businesses.

“We appreciate that there has been disruption in terms of road, bridge and footpath closures – some of which have been extended by necessity – but the scale and complexity of this engineering project cannot be underestimated.

“Obviously there has been a significant delay as a result of the lockdown, however once completed, the flood protection scheme will give the Stonehaven community peace of mind for decades to come.

” I would like to thank all those affected by the works for their ongoing support and understanding.”