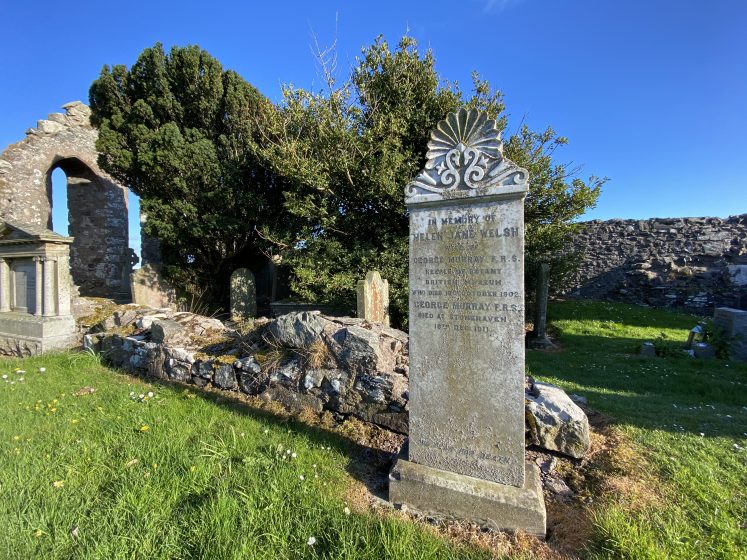 A MAN whose contribution to Scott’s 1901 expedition to Antarctica is commemorated by a mountain named after him, lies buried in Stonehaven – I’d never heard of him, have you?

A passing glance at a modest gravestone in the Cowie kirkyard revealed that Helen Jane Welsh, whose name heads the gravestone, rests with her husband George Robert Milne Murray, who died in 1911.

I was about to walk on, but a detail recorded on the stone – ironically almost hidden by the lichen – made us take photographs of the stone and go home to find out more.

He was born in Arbroath in 1858 to what must have been a relatively humble family, as his father is described as a trader.

The young Murray was educated at Arbroath High School before going on to study botany at the University of Strasburg. Mycolgy – fungi – was one of his early interests, but he went on to make a special study of marine botany and the slimy world of seaweeds and algae.

It would appear he had an infectious enthusiasm for his subject – persuading several steamer captains to learn how to collect plankton and bring him specimens from around the globe.

In 1876 Murray was appointed assistant to the Department of Botany at the British Museum. Almost twenty years later, in 1895, he became head of the department, its Keeper. By this time the collection had moved to South Kensington.

A remarkable fact is his brother Alexander, an archaeologist, was, at the same time, heading the department of Greek and Roman antiquities.

Murray undertook several voyages to gather marine organisms. Like any eminent scientist, he penned articles, papers. And he co-authored an Introduction to the Study of Seaweeds.

So he was well qualified to edit a guide for scientists on the forthcoming British National Antarctic Expedition in the Discovery. He also wrote a brief section, ‘Notes on Botany and How to Collect Specimens’.

Then, in early 1901, a science versus adventure power struggle within the expedition saw Robert Falcon Scott, the adventurer, appointed expedition leader. John Gregory, who had hoped to command, resigned as director of the civilian scientific staff of the expedition – and Murray was given the post in his place .

One of his tasks was to train the ship’s doctor Reginald Koettlitz who was given the responsibility of botany and the study of the Antarctic phytoplankton – that all important base of the food chain that supports marine life.

That February Murray travelled to Dundee, where the Discovery was being built, to meet with Scott and to organise the oceanogaphic equipment.

He later wrote in a letter, ”I have just come home from Dundee where in one and a quarter days I have settled the deck plan for winches, reel, sounding gear, trawling and dredging gear, special tow/netting and thermometer and waterbottle gear and the fittings for the biological and physico-chemical workshops. Many matters, which would have taken weeks of Committees (Joint and Disjointed) Scott and I have settled quietly….Scott is a good chap and a first class organiser.”

In August that year, he joined the ship’s compliment including third lieutenant Ernest H. Shackleton as they set sail.

Murray was never intended to stay for the entire voyage. He had been due to carry on as far as Australia but left the vessel when it reached Cape Town in October – though not before he and Scott had been ‘toiling like galley slaves’ to test the equipment and Murray had satisfied himself they could, ‘manage all these new machines.’

It is possible the ill-health of Murray’s wife hastened his return home. She died in 1902.

Murray himself had health problems that forced his retirement in 1905.

I’m struggling to find any references to the last six years of Murray’s life. Presumably he moved to Stonehaven – his wife was already buried there, so there must have been links to the town.

Slaters Royal National Commercial Directory of Scotland for 1903 lists a George Murray, grocer and wine and spirit dealer at Bridgefield – his father?

And it is recorded that Murray was residing at Bridgefield Terrace when he died, having remarried to Amelia Holder. He was also survived by his daughter Helen Margaret Murray.

And as for that mountain – Mount George Murray (75°54′S 161°50′E) is described as a flat-topped feature of granite with dark sills, about 1097m high, lying on the southern side of the Davis Glacier. It was discovered by the British National Antarctic Expedition, 1901 – 1904.