The Biplane has Landed 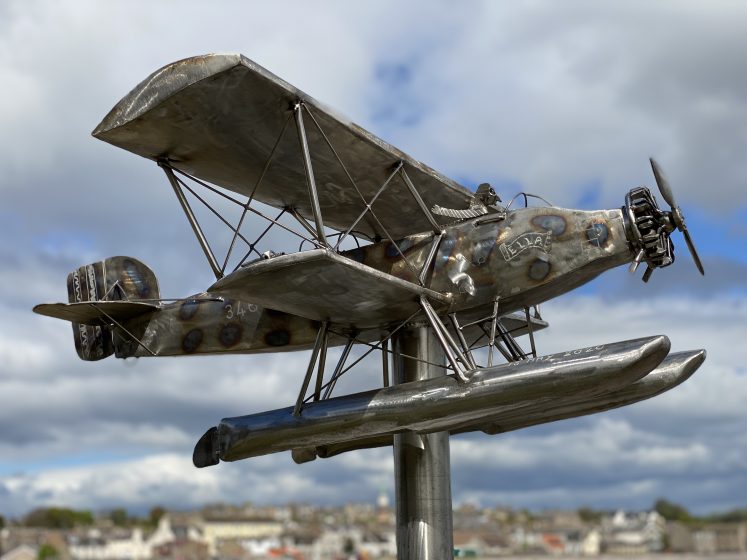 STONEHAVEN’S latest stainless steel sculpture has appeared at the boardwalk, having been installed in a covert, dawnlight operation .

The sculpture commemorates an unexpected wartime landing in Stonehaven harbour by a Norwegian biplane – eighty years ago in May 1940.

A plaque at the foot of the pedestal shows a contemporary press photograph.

12/14 – 1940: The Norwegian Marinens Flyvebaatfabrikk M.F. 11 (sometimes known as the Høver M. F. 11 after its designer) was a three-seat, single-engined byplane used for maritime reconnaissance pre-World War 2. Here it is in Stonehaven in May 1940 after landing with airmen aboard who evaded Luftwaffe planes on the trip across the North Sea.

Inspiration for this latest work celebrating Stonehaven’s sealife and coastal heritage, emerged from the enthusiastic chatter of local historians who are known to gather in the harbour-front hostelry, The Ship.

Indeed several of the gentlemen, who contribute regularly to a growing archive of Auld Toon anecdotes, assisted the sculptor in his quest for technical information about the plane and its wartime visit – though little more is known about that than the information above.

And, since our sculptor derives much of his artistic motivation from his fellow ‘Shipmates’, we have been warned he fears his flow of inspiration has temporarily dried up.

Fans of Stonehaven Banksy’s work will, however, be relieved to hear that the trawler sculpture that has been missing of late was also reinstated this morning.

I remember the day it landed on the Sea ! Our family was looking out of the living room window @ The Ship Inn The Crew came into the Pub I thought where are they from, they are speeking we different accents?

So who spotted the not-so-deliberate error in my counting? I have corrected the story to show 80 years since 1940, not 60 as originally written. Oops. Makes Bill’s recollection even more remarkable.