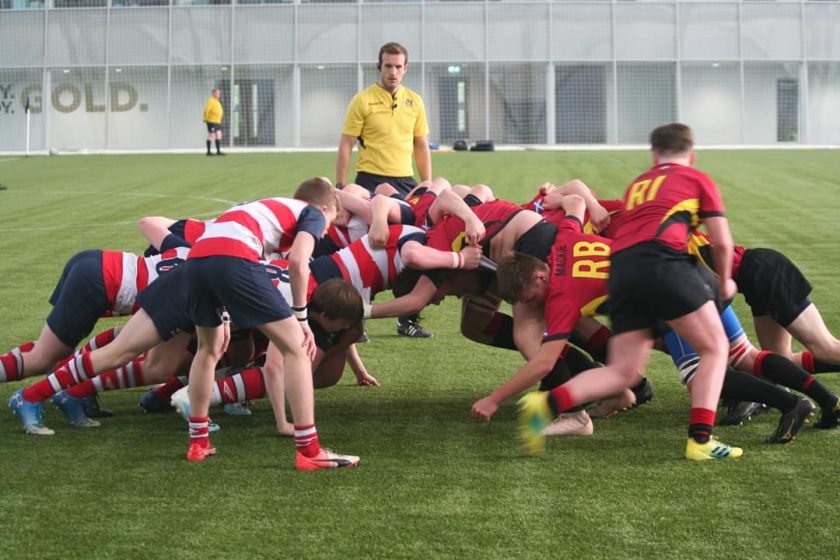 THIS was Mackie’s first visit to the Heriot Watt sports facility nestled neatly in the university campus, and what a first visit it turned out to be.

Despite the bus being ‘Baltic’ the heat on the field of play certainly lived up to expectations. Peebles lined up looking like a well-drilled and confident outfit (allegedly buoyed by their “just turn up and win” attitude pre match!) The Mackie boys had other things on their mind!

The game itself was a nervy, cagey affair in the first half, with the Red ‘n’ Blacks taking the advantage, storming into a 12-0 lead with scores by Conan Adams and Harris Mitchell. One conversion from Craig Strachan set the boys on easy street.

But with every silver lining comes a cloud and Peebles fought back to earn a share of the spoils at the interval….handling errors and far too many wrong decisions by the lads showed that the nerves were jangled.

With a wee inspirational talk from Andy and Tommy at the break the lads went for the game by the scruff of the neck. Much more composed on the ball and more dominant in attack, they started to stamp their name all over the game.

There were scores from Harris Mitchel (2), Rhys Innes and Harris Ferrol (2) and with extras coming from the boot of Craig Strachan, this put the game out of reach from a shell shocked Peebles side, who despite a late flurry and a score were no match for the Redcloak outfit.

Mackie deservedly earned their right to compete at the national stadium in March. Their opponents that day will be a name familiar to the club: Boroughmuir, who defeated Hawick 12-10 in the 2nd semi final.

All roads lead to Murrayfield on the 22nd March .