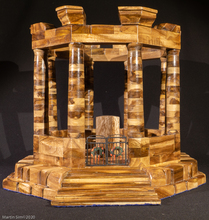 The Tolbooth Museum in Stonehaven has another reason to visit it. For those who find the walk up to the War Memorial on the Black Hill too difficult there is now a model they can view in the Museum.

On Friday 17th January the museum was presented with the model by its creator Colin Stewart Sandeman, and his wife Moyra, from Brechin. The model is made from broomwood which he has used in a variety of other projects. After taking lots of measurements, photographs and notes, Colin has spent many weeks working with the small pieces of broomwood getting them all to fit together. He also made the gates out of brass. Moyra made the poppy wreaths as well as giving encouragement, moral support and refreshments!

Colin Sandeman is a retired civil engineer living in Brechin. He expressed an interest in making furniture as a hobby and a friend suggested that Colin viewed the broom wood furniture collection at Blair Castle in Perthshire. Colin was inspired by the collection and decided to try his hand with this wood. His first piece, a bureau, was created in the summer of 1985 and presented to his wife as a birthday present. Since then he has made a chest, a clock, a table, a corner cabinet, a Shetland spinning wheel and a cockpen chair.

Broom wood is a very unusual wood to work with but its use was encouraged by the 3rd Duke of Atholl who, in 1758, commissioned a George Sandeman, a furniture maker from Perth to make furniture from this wood for the castle’s Derby Dressing Room. The furniture can still be viewed at the castle and it is believed to be the only collection of broom wood furniture in the UK. Coincidentally Colin later discovered that George Sandeman was his great-great-great grandfather. It is believed that the idea of using broom wood for furniture originated in Scandinavian and subsequent historical research has discovered that Colin’s grandfather five-times removed came from Scandinavian.

Broom wood furniture is rare due to its small size and fragility. In addition the wood has to undergo a series of chemical treatments in order to enhance colour variations and grain inherent in the wood. Crafting furniture from this wood is labour intensive – the model just donated to the museum required more than 200 hours – and consequently Colin is believed to be the only person using broom to make furniture today.

The model has to be viewed in person to appreciate the skill and patience that was required to create it.