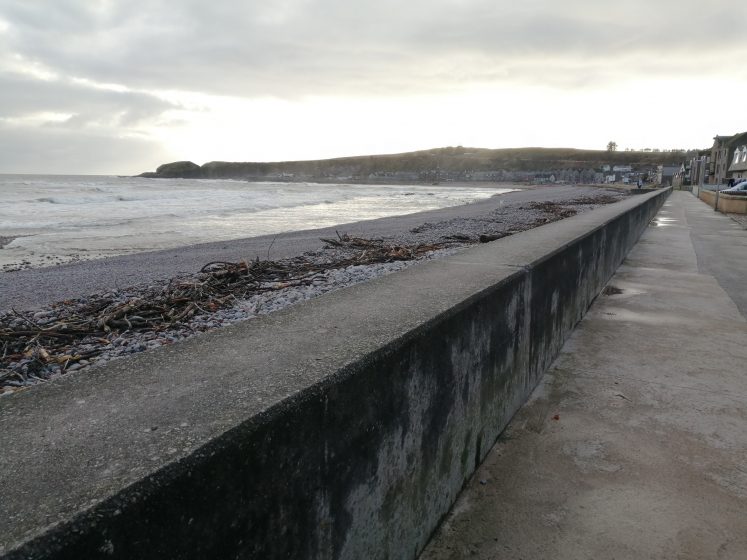 YESTERDAY’S meeting of the Infrastructure Services Committee approved options for Stonehaven’s coastal defences – along with a caveat that offshore methods and beach wave control measures must be explored and factored in before our sea walls are raised.

Councillors were making the final consideration of the proposal to raise sea walls all the way from Cowie to the Carron – along with the attached comment from the Kincardine and Mearns Area Committee saying other measures such as extending the Brachans should be factored in first.

For the third time Alan Turner of Stonehaven Flood Action Group made a presentation outlining the impact a raised central area sea wall and promenade would have on residents.

He also highlighted the loss of parking and loss of view a raised wall and pathway would bring to the beach front businesses north of the Cowie River.

”I never dreamt we would come out with a proposal that was worse than flooding,” he said.

Mr Turner drew on both his engineering qualifications and his lifetime’s experience of the area to make a plea for other measures to reduce the need to heighten the walls. He said extending the Brachans could have a 50% effect, meaning the path should not need to be raised.

And he said: ”Key to us is have a shingle bank and maintain that shingle bank. That will actually prevent the waves getting to you.”

Saying raising the sea walls would forever change the front of Stonehaven, Mr Turner said meeting SEPA’s end of year deadline for proposals risked an outcome that was not wanted – as many feel has happened at the River Carron.

”There is no stopping this juggernaut, from what we saw with the Carron River,” he said.

”The very people that were flooded are the ones speaking out against this.”

A Million Pounds Spent on the Study

Philip McKay was acting director for Infrastructure Services at that point in the meeting. The chartered engineer said he had employed hydrologists, meteorologists and coastal hydrologists to inform the report, which had cost ‘just shy of £1 million and two years to put together’.

Mr McKay said the proposals as stated were flexible enough to include some of the other measures mentioned – including groynes and fishtails. The £24 million costing of the scheme includes what he described as a 60% optimisation bias, which provided for further costing and studies into options such as extending the Brachans.

”I don’t think at the minute we have ruled anything out.”

But he added: ”We loooked at solutions that didn’t raise the height of the wall and we couldn’t find one that works.”

And he cautioned members to bear in mind the 1 in 200 year event they were trying to mitigate. He said combined with the effects of climate change, such an event would be ‘biblical’ in its impact.

Ian Mollison said the impact of rising sea levels had to be taken into consideration and he moved to accept the proposals along with the caveat as worded by the Kincardine and Mearns Area.

Councillor Wendy Agnew asked that the wording be made clearer with the addition of more specific detail on the sea defences wanted ie extension of the Brachans and use of groynes.

With Councillor Martin Ford saying the scheme already had flexibility, ‘but if it makes you feel better,’ the motion was passed.

The preferred option and caveat will now be referred to SEPA, who are prioritising Scotland’s flood defence spending in what is described as a highly competitive process, and who will make recommendations to the Scottish Governement.

Back in 2016 Council leaders and Scottish Government ministers committed £420 million of funding over the next 10 years to flood protection schemes.