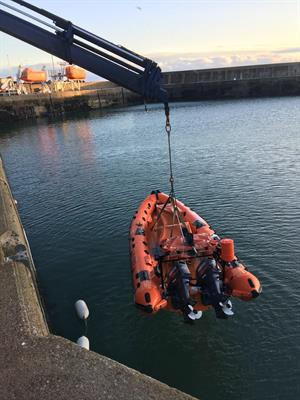 By Lorraine Clark of Stonehaven RNLI –

It was a sad day this week as Stonehaven RNLI said goodbye to the last Atlantic 75 Lifeboat in service in Scotland.

The volunteer crew watched as ‘Miss Betty’ was winched out of the water to be transported to Poole. This follows on from the arrival at the end of October of the bigger Atlantic 85 that is now to be stationed at Stonehaven.

The brand new Atlantic 85 “Jamie Hunter” is due to arrive on station in the next few weeks. At the moment the crew are training hard on a relief Atlantic 85.

The new lifeboat has some advancement on its predecessor. The Atlantic 85 design allows room for four crew members and more kit than the Atlantic 75 lifeboat, which only had room for three crew members. The lifeboat is powered by two 115 horse power engines and has a stronger hull and greater top speed of 35 knots. The added radar allows the crew to operate more effectively in poor visibility and there is also VHF direction-finding equipment.

The Atlantic 85, which was introduced to the RNLI fleet in 2005, also carries a full suite of communication and electronic navigation aids, as well as a searchlight, night-vision equipment and flares for night-time operations.

LOM Andy Martin said “We are all sorry to say goodbye to ‘Miss Betty’, the Atlantic 75 has been a great lifeboat and kept many people safe, but we are proud to be the custodians of this new lifeboat that will allow our volunteers to save many more lives in the years to come.”