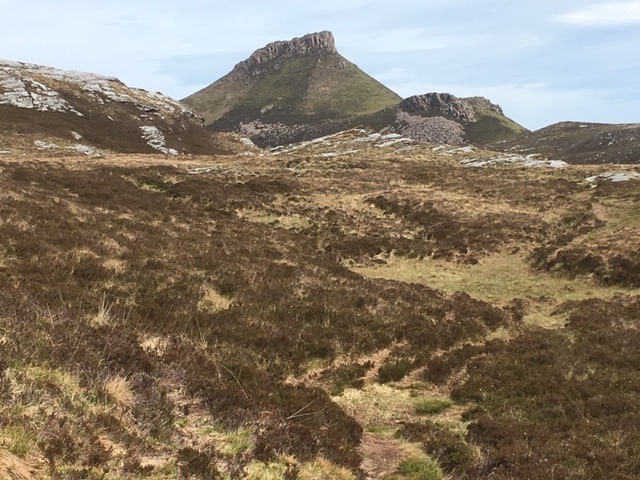 From Stonehaven Mountaineering and Hillwalking Club –

In 1891 Hugh Munro published his list of mountains and their subsidiary tops of 3000 feet and over in Scotland.

He died of influenza in France on the 19th March1919 having failed to summit Carn an Fhidhleir, the Inaccessible Pinnacle, and Carn Clioch-mhuilinn – since unfortunately demoted to a subsidiary top.

The Munro Table, a large scale environmental community project invited climbers to choose and ascend one of the Munros during the period 19 March, 2019 and 19 March 2020, in celebration of 100 years since his death.

Stonehaven Mountaineering and Hillwalking Club chose Beinn Bhrotain. Carn Clioch-mhuilinn is its subsidiary top. An attempt was made in March this year but the group were defeated by the winter conditions that prevailed, managing only to reach Carn Clioch-mhuilinn where staying upright proved a challenge.

A second, and this time successful, attempt was made at the Club’s October outing. This time bikes were used to shorten the day.  We cycled from Linn of Dee to the White Bridge, where bikes were secured before continuing on foot along the rough track on the northwest bank of the River Dee, which was followed for several kilometres before finally reaching the Allt Garbh.

A path heads up west and then north from here, just skirting the top of Coire an t-Sneachda and on onto to the 1108m spot height, before finally heading west to the trig point at the summit of Beinn Bhrotain (1157m). Here we stopped for a lunch break, took photos and selfies and took in the beautiful views all around us.

Then we headed to the summit of Carn Cloich-Mhuilinn (942m), which Sir Hugh was supposedly saving as his last, before heading south east, missing out the summits of Carn Fiaclach and Carn Fiaclach Beag, before finally arriving at the track leading back to White Bridge where our bikes awaited us. These were a welcome sight at the end of what had been a long 17.7 mile day.