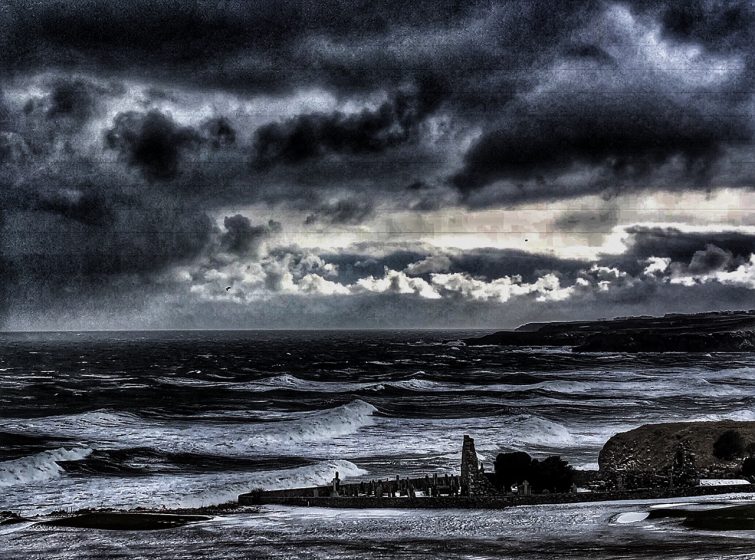 PROPOSALS for flood solutions that will forever change the seaward face of Stonehaven go before the Kincardine and Mearns Area Committee on Tuesday (October 29).

Despite much public opposition, the recommendation following a coastal flood protection study is to raise our seawalls all the way from Cowie to the harbour.

But it would appear the determined efforts of the Stonehaven Flood Action Group, SFAG, to look for other options, have met with some success – with a more nuanced approach to the walls’ design now being recommended by the consultants who would include other defence measures and want further studies undertaken.

But has this more considered approach already been shelved by the Shire? There is quite a significant difference in the wording of the recommendations of JBA Consulting, to those put before the councillors in the committee paper and which they are asked to consider and provide comment to the Infrastructure Services Committee.

For the consultation, the bay was split into three sections, with a central zone running from the north bank of the River Cowie, to the harbour.

And for this section the committee recommendation reads: ”Raise existing wall and implement an adaptive beach recharge scheme immediately and replace (River) Cowie defences in year 30.”

Meanwhile the JBA report recommendation states: ” Further consideration should be given as how to optimise the height of the rear wall including:

” Provision of an offshore reef to attenuate wave energy i.e. extensions of the Brachans rock platform

” Upon undertaking a full assessment of the services further consideration should be given to the suitability of the level to which the rear promenade is raised.”

JBA’s proposals to raise the walls immediately, but with varying heights in the north (Cowie ) section have also been lost in the committee paper wording.

No works are proposed for the harbour.

Two public engagement sessions were held earlier this year, in January and June. At the second event, members of the public were shown technical drawings of the short listed options and asked to comment on the proposals.

No effort was made during the consultation to inform the public by use of available video demonstrations or models. No costing information was presented to inform/explain the decision making.

From the comments made, it is clear many people did not feel they were able to understand the options presented.

Another states: ”I have tried my best to understand all the paperwork but think it is written by engineers for engineers and is of little use to any normal citizen.”

And then there were those who didn’t have a clue there was any consultation at all, or confused the sea flood consultation with the ongoing flood prevention works at the River Carron. Why were there no posters put up along the sea front to inform the public?

After the poorly attended June engagement in the Town Hall, SFAG contacted households along the seafront. Their actions provoked 104 letters of comment – almost unanimous in their objection to a raised wall and promenade.

The works currently underway on the River Carron are a reminder that all it takes is one or two committee meetings then, even for huge projects, the cogs may start turning in the inexorable machine of change.

The Kincardine and Mearns Area Committee will meet at 10am on Tuesday October 29 at Woodhill House, Westburn Road, Aberdeen, AB16 5GB. Members of the public are welcome to attend.

Good balanced article giving the pro’s & con’s. It’s a shame the consultation earlier in the year hadn’t done the same!