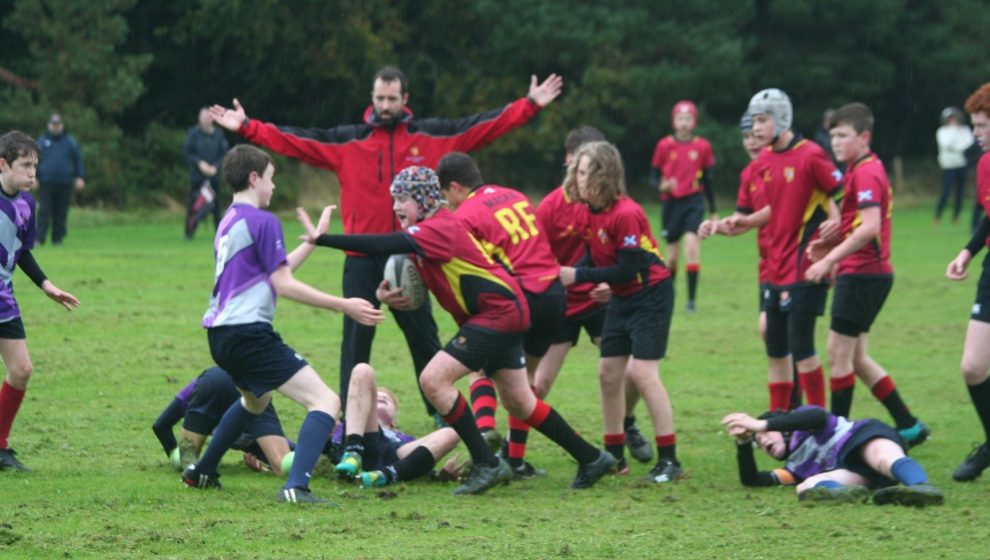 Scores from this weekend

With Redcloak being deemed unplayable after an early morning pitch inspection, the decision was taken to move the matches to the school playing fields, which have good drainage – and where the  playing surface was in good nick after the relentless downpours of the morning. It was a good decision with both Redcloak  pitches  resembling duck ponds.

Mackie U14 started the more dominant side and were soon applying the pressure onto a depleted Granite City side, who could only field 13 players . Mackie worked through the phases of play and were soon rewarded with the first of nine tries.

The Mackie boys worked hard in the driving rain but discipline cost them, as too many penalties were given away allowing Granite City to score one of two tries.

The boys regained their composure and started to work through the plan that was set out by the coaches. Notable was the game control shown by Angus Foubister in terrible conditions.

The coaching team have been working hard on game management and the roles each player has to play. The forwards were doing the hard work running straight lines hitting rucks and winning ball.

The try of the day came straight of the training ground with Grant Lindsay tipping the ball on before contact drawing in the defender, which opened up space allowing Fergus Robertson a clear run to the line.

The pressure was always on Granite City who. to their credit, stuck at it and were rewarded a second try from a penalty given away by Mackie.

To sum up today’s game, nine tries were scored with some great interplay between forwards and backs: a real team performance!

And the girls were in action too

Grampian girls is a collective of all the little pockets of girls throughout the area. They train at their own clubs for three weeks then have a combined session every 4th week. They also play in series events throughout Caledonia North at u12 u14 u16 U18 level.

This weekend saw six Mackie girls take part in an event in Inverness, playing against girls from the Highland and Caithness area.