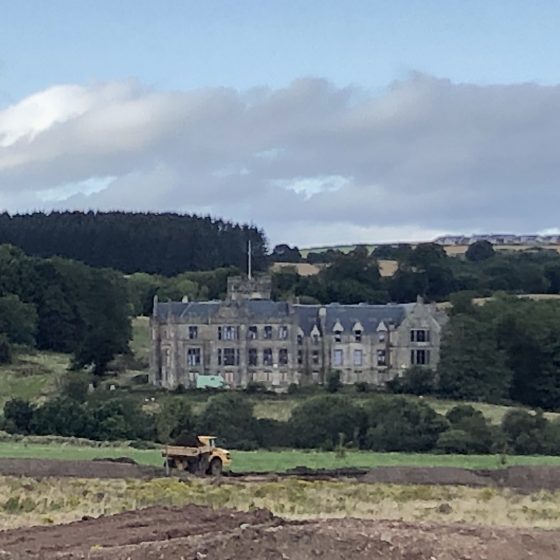 COUNCILLORS’ discussions about the future of Stonehaven were dominated by discontent about decisions of the past, when they considered development in the town for the next decade.

Yesterday, members of the Kincardine and Mearns Area Committee were in attendance at the second day of a special meeting convened for the next Local Development Plan, LDP, which will come into effect in 2021.

Cllr Sandy Wallace had to leave the meeting early so could not vote on recommendations. He did however lead the charge with comments on one of the sites at Ury Estate.

Termed KN087, this site at the Blue Lodge has 99 homes allocated to it in the LDP. It is on land where the developer was first given permission for 25 houses to enable the restoration of Ury House. A subsequent permission for smaller houses took the number to 51. The final increase to 99 houses is to maximise land use.

Mr Wallace said: ”On a point of principal, I do not like going across the bypass. KN087 has high density housing in the middle of nowhere.”

Mr Wallace went on to propose that it and two other development bids within Ury Estate totalling 271 houses be removed from the LDP – and include instead KN032 which would see 400 homes on land at Braehead.

He did not find a seconder for his motion. But his views on development across the bypass were echoed by Cllr Sarah Dickinson.

She said: ” I agree we should not be over the bypass, but we clearly are.”

Mrs Dickinson also voiced concerns about the location of the housing and later added: ”I don’t like the development at Ury but we need to finish what has started.”

Cllr Colin Pike said Mr Wallace had made a good point about crossing the bypass and described the bids at Ury as ‘ a hotch potch’.

He said: ”We are forcing ourselves to make decisions we are not happy with – let’s have a break and stop to think.”

He said: ” The plan is what we have already agreed and we can’t move away from that.”

At this point Mr Pike said: ”We are being rail-roaded here.”

A long, rambling discussion that touched only briefly on other bid sites in Stonehaven was finally brought to a brisk conclusion by committee chairperson Cllr Wendy Agnew – who made it clear she had voted against the Ury proposals at the outset.

And in his summary of the committee’s conclusions, acting area manager Bruce Stewart noted that it was ‘accepted reluctantly’ to proceed with sites KN087, KN102 and KN103 for inclusion in the LDP.

While our councillors have their concerns, a spokesperson for The FM Group said in general, the Ury estate masterplan is progressing well with various activities onsite and a programme of activity to follow.

She said: “At Mackie Village the construction of 91 affordable homes is well underway with piled foundations almost complete and superstructure due to commence in September with a target for completion of all homes in late 2020/early 2021.  The footpath connection under motorway to Mackie Academy will be closed during construction with plans to reconnect this in early 2021

“The East Lodge footpath link has recently been completed and now allows the completed 85 homes to be connected into Stonehaven, increasing connectivity with the town. Agreements are progressing with Kirkwood Homes to bring forward the rest of the East Lodge Development and in doing so further key infrastructure will be installed – in particular the link over the River Cowie and new, safer junction arrangements onto the Netherley Road and further improved footpath and cycle path provision.

Two Supermarkets Have Stonehaven in Their Sights

“The activity onsite has resulted in two national food retailers asking for terms for the supermarket site on a leasehold basis and we are advancing discussions on that at present. We are also making progress on the new infrastructure link between the Slug Road and the Netherley Road. The costs have proved to be far higher than expected but we work towards having the link completed for December 2020 which connects the AWPR with Stonehaven and Ury Estate.

“Due to these changes the original master plan has had to change accordingly. We have been in correspondence with councillors in an attempt to keep everyone updated and aware of what will be delivered. An up to date masterplan will be provided to the Council after the proposals are approved.

“In addition to this we are working closely with the planning department to clear some outstanding planning conditions on the Jack Nicklaus Golf Course and hope to start works on the Course in October this year with a planned completion in late 2022.  The works to create a club house facility within the Castle will be co-ordinated to open with the Golf course opening.”

The last paragraph states castle, I never realised that ury house was ever classed as a castle!!!!!!!!!!!!