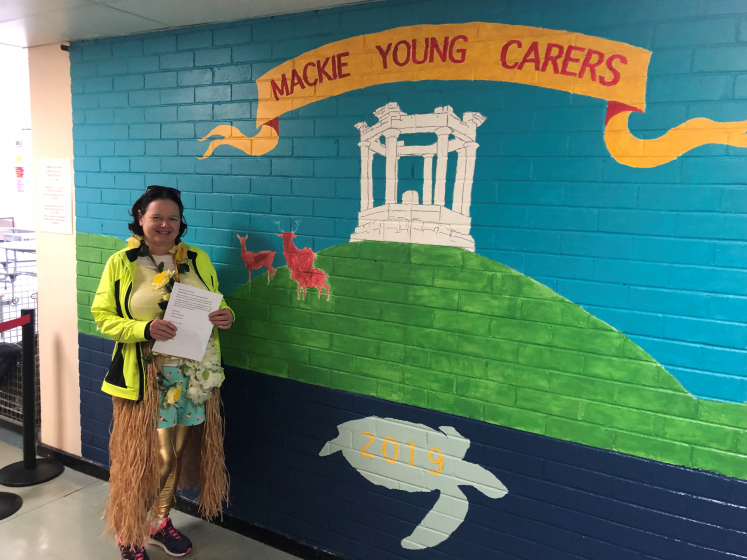 YOUNG carers at Mackie Academy have designed a mural for the school’s main corridor and are looking for sponsors for each brick to raise funds for a weekend respite break.

Their support and attainment member of staff Fiona Beeley told The Bellman: ”Our young carers are under a lot of stress and they never complain.

”They are usually mature beyond their years in many ways, yet when we take them out to do things and meet as a group they often want to release energy and quite simply play in a way that is reminiscent of younger children.

” I believe we give them the space to relax and have fun for a while when we meet.”

Ms Beeley said the school is aware of approximately 35 young carers. However, they think there are more in the school community. Their aim is to make is acceptable to pupils to be open about their caring roles and to encourage them to seek the support they are entitled to.

Young Carers are a group in the school who are difficult to identify. These young people can be caring for family members with mental and physical illness; drug and alcohol addiction or siblings with disabilities. They can be affected by their caring roles in a variety of ways from their own mental and physical health to academic attainment and attendance at school. Pupils are supported in school by staff, the young carers group and. Some young carers are also supported by bodies such as Quarriers and Community Learning.

The Young Carers Group did a bag pack at the Co-Op last year to raise the deposit for this trip. They are now asking individuals and organisations to sponsor bricks within the mural.

Bricks cost £5 for an individual and £25 for an organisation, there is no limit on the number of bricks people can sponsor. The forecasted completion date is the end of September when all the sponsors names will be added to the bricks. To date the pupils have raised just over £1,000.

Anyone who would like to help the young carers enjoy a weekend break will find sponsor forms in the school’s reception or can post a cheque made out to the Mackie Academy school fund. Any posted materials should be to Mackie Young Carers Group, C/o Fiona Beeley  PT PSAT , Mackie Academy , Slug Rd, AB39 3DF

Fiona Beeley is pictured next to the mural the pupils have designed and are painting.