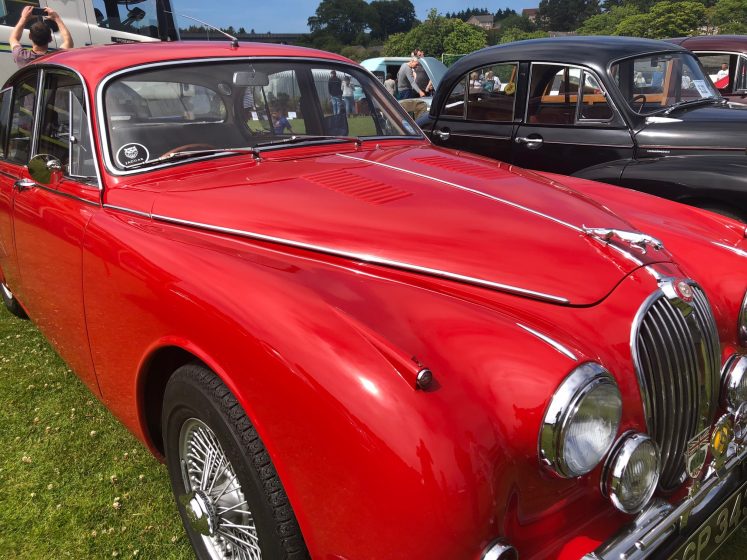 From A Goodly Heritage by Archibald Watt, published by Stonehaven Heritage Society, 1990, and used with the kind permission of the Tolbooth Museum

Robert Thomson was the father of modern transport and a remarkable inventor, the inventor, in fact, of pneumatic tyres. He also had a world-wide reputation in engineering and was an expert in blasting. The son of a Kincardineshire wool-mill owner (the ‘Oo’ Mill on the Carron River), he was born on July 29th, 1822, in a house at the south of Stonehaven Market Square (No. 9), now marked by a bronze plaque presented in June, 1922, by the Royal Scottish Automobile Club to mark the 100th anniversary of Thomson’s birth.

Although originally destined for the Church, Thomson displayed no aptitude for academic study and expressed such hatred of Latin that his parents packed him off, when only 14, to an uncle in the United States to train as a merchant. As he showed great talent for mechanical science, however, after spending 2 unsuccessful years in America, he served an apprenticeship in engineering in workshops in Aberdeen and Dundee. He then learned the profession of a civil engineer in Glasgow and was associated in the building of the famous Dean Bridge in Edinburgh. He was employed in the demolition of Dunbar Castle and in blasting operations at Dover cliff where, encouraged by no less an expert than famous physicist, Michael Faraday, he first applied the method of firing explosive charges in mines by electricity, a method later universally used with great saving of life.

With only £6 in his pocket he headed when 19 to London where he was introduced by Faraday to Sir William Cubitt, consulting engineer in extending the South Easter Railway to Dover. Cubitt set Thomson over 500 men engaged in blasting part of Dover cliffs where his invention was greatly successful in preventing the loss of life.

At the age of 22 Thomson started his own business as a consultant and was employed by Robert Stephenson as a railway engineer in the Eastern Counties. In 1852 he went to Java as an engineering agent to erect the machinery of a sugar plantation which he had designed and which was greatly superior to anything previously used on the island. Becoming a partner in the estate, Thomson resided there till 1862 when he settled in Edinburgh where he died at 3 Moray Place on March 8th, 1873 at the early age of 50. He is buried in the Dean Cemetery.

When only 23 years old, Thomson invented a mechanically driven horseless freight vehicle which, he discovered was badly shaken by the poor rutted roads. To relieve this he invented a solid covering of rubber for the wheels and, later, one with a cushion of air for he realised that if he made the engine stronger – and inevitably heavier – the roads would deteriorate even more. In 1845 he was granted in England the patent which proved him the originator of the pneumatic tyre, an air-filled inner tube of rubberised canvas within a non-expandable outer cover of leather. This was tried out in Edinburgh but, strangely, although the carriage with tyres moved smoothly and noiselessly over the cobbled streets, the invention was not a commercial proposition, was considered a curiosity and not developed, perhaps because indiarubber was then very expensive. Thomson was ahead of his time, and widespread use of the tyres had to wait for John Boyd Dunlop.

In his patent of December 10, 1845, Thomson states, ” The nature of my invention consists in the application of elastic bearings around the tyres of … carriages for the purpose of lessening the power required to draw the carriages, rendering their motion easier and diminishing the noise they make when in motion. I prefer to employ … a hollow belt composed of some air and watertight material such a caoutchouc or gutta-percha, and inflating it with air whereby the wheels will in … their revolution present a cushion of air to the ground, or rail, or track on which they turn.” His specifications and his patent disclosed in every important particular the pneumatic tyre re-introduced 43 years later by Dunlop for bicycles.

The first ‘aerial wheels’, as they were termed, were fitted on October 1st, 1847, for £42 2/-. In 1846 a patent was granted in France, and the following year in the U.S.A. The noiselessness of Thomson’s tyres and their size (a cross-section was 5” in diameter) attracted immediate attention, several carriages were ”shod” with them, and the London Mechanics’ Magazine stated that one horse-drawn brougham ran 1200 miles without the ”slightest symptoms of deterioration”. In 1851 at the Great Exhibition of London, Thomson displayed an invalid chair with wheels shod with a solid band of vulcanised rubber, said to be as ”durable as iron”, and in 1868 the North British Rubber Company produced for him giant pneumatic tyres 6′ in diameter, 15” wide, 5” thick and weighing 750 pounds. With these Thomson fitted horse-drawn vehicles with marvellous results in passenger comfort, and by 1868 his 5” thick solid tyres for steam traction-engines were known all over Europe.

Thomson when only 17 built a successful ribbon saw and completed his first working model for the elliptic rotary steam-engine which he later perfected. His genius also gave us portable steam donkey-engines for dock work and an improved hydraulic dry-dock (1860). He also patented in 1849 the first self-acting ”fountain-pen” which had a reservoir for ink, in many ways the precursor of the modern fountain-pen. His ingenuity won it a place in the Great Exhibition of 1851. While in Java, Thomson in 1852 turned his mind to improving the machinery in use for refining sugar. He wished to erect a crane on the waterside as part of this project, but the authorities insisted that it would have to be dismantled nightly in case inhabitants fell over it. Undaunted, Thomson invented the first portable steam crane (1860). Sadly, Thomson’s inventions were so far ahead of contemporary engineering achievement that he failed to find backers to develop his ideas.

Even when retired, Thomson designed the first mechanically propelled vehicles for long-distance road haulage, his first two steam tractors being built in Ipswich in 1871. After a test run between Ipswich and Edinburgh the vehicles were shipped to Rawalpindi and put to work by the Indian Transport Service, carrying passengers and freight over a 70-mile stretch of the Grand Trunk Road. Refuelling stations were set up at 14-mile intervals with water tanks every 7 miles, and the ”trains” ran at an average speed of 5 to 8 m.p.h. Freight capacity was considerable, a load of 64.3 tons being drawn up a gradient of 1:33 during a test run. The ”road steamers” as they were nicknamed had huge, thick indiarubber tyres like elephant’s pads on the driving wheels to spread the great load and came into their own in parts of the world here there were no railways. In the U.K. the Manager of Glasgow Tramways claimed that ”no single article weighing over 10 tons is ever moved except by one of them”.

Thomson married a personable Bohemian lady, Clare Hertz, in Java, and they had two sons and two daughters all of whom figured prominently in their spheres of life. The eldest son, Harold, played an important part in organising mechanical road transport in World War 1 and was a Mayor of Westminster; the second child, Elspeth, married Kenneth Grahame of ”Wind in the Willows” fame and was a close friend of Tennyson, Hardy and Theodore Roosevelt; the third child, Winifred, exhibited at the Royal Academy and was a close friend of Princesses Helena Victoria and Marie Louise, sisters of King George V; the fourth child, Courtald, became Lord Courtald Thomson, High Sheriff of Buckinghamshire, who left his fine country-house to the nation to be used by the Foreign Secretary for entertaining distinguished overseas visitors.

Every year since 1968, in late June, a rally of veteran and vintage vehicles is held directly opposite the site of Thomson’s birthplace by Stonehaven Thomson Memorial Fellowship to commemorate and publicise his genius and great achievement. It was inaugurated by the Garioch Motor Club Restoration Section and the ”Scottish Clubman” motor sport group in conjunction with the Stonehaven Town Council.