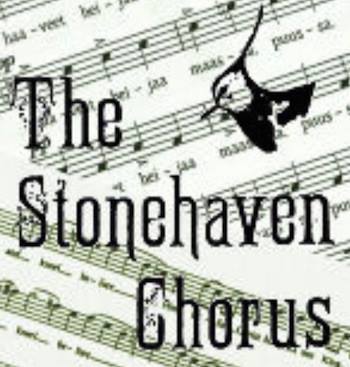 Sunday evening’s performance of Bach’s St. John Passion by The Stonehaven Chorus was one of their best ever. The only regret was that their conductor Ralph Jamieson was unable to take part in the performance owing to a recent tragic death in the family. We send him our deepest condolences. Fortunately, one of the bass singers from the chorus, Martin Scott, who has experience in conducting as well as in singing was able to take over and to present a majestic and spellbinding performance. The addition of surtitles on a screen above the choir was a brilliant idea enabling those of us not fluent in German to follow the action closely as it happened. Translations printed in a programme are usually not followed as closely or as immediately.
The programme note by John Bawden was particularly helpful too. It picked out all the essentials of the construction of the work and allowed us to hone in on the various performers, choir included, who were fulfilling Bach’s demands so very well.
Let’s begin with the chorus. Their singing was admirably strong and clear especially in the opening and closing numbers and at the conclusion they showed no signs of tiring, singing as heartily and indeed heartrendingly at the end as they had at the beginning. The sopranos were particularly lively in the opening chorus, Herr Unser Herrscher. They cut their way incisively through Bach’s orchestral complexities to produce a marvellously attention grabbing opening to the work. The chorus has two other important roles in the work, both of which they accomplished brilliantly. These were the crowd scenes where they became the baying mob demanding the death of Christ and then at the opposite end of the dramatic and emotional spectrum, in the Chorales, they expressed fully the sorrow and sympathy of humanity for the horrors inflicted upon Jesus. Harmonies were rich and colourful and even the smaller numbers of men in the chorus often blazed through the musical textures very dramatically.
The six vocal soloists were all quite young. They sang with the freshness and enthusiasm of youth. Special paeans of praise must go first of all to Christian Schneeberger who sang the part of the Evangelist. He is ‘on’ so much of the time but he never tired. His lovely clear tenor voice was perfect for the part and he added so much emotion and expression to his singing – an absolute essential for any evangelist.
Douglas Nairne as Christ had just the right warmth and nobility for the part. I was surprised that he took several of the introspective arias too. This was quite unusual for the singer who plays Jesus. His Aria supported by Bryan Dargie and Rachel Mackison on violins with harpsichordist Jeremy Coleman changing to lute stop was absolutely delightful.
Bass Zorbey Turkalp sang the parts of both St. Peter and Pontius Pilate, excellent characterisations. He too had a bass aria in which he was backed rather beautifully by the chorus.
Timothy Coleman sang his tenor arias with a powerful sense of commitment. He has a fine clear tenor voice and his expressive delivery of the texts was most moving. His aria supported by the two violins, muted this time was a real delight.
Our two female singers have limited scope in this work but Bach does give them splendid backings for their arias. Mezzo Barbara Scott had the two oboes played by Geoffrey Bridge and Fiona Gordon and soprano Moira Docherty had two flutes played by Margaret Preston and Kathryn Gammie. How perfectly delicious was that? I liked the contrast between their two voices, Barbara, rich and dark and Moira clear and weightlessly soaring without any hint of stress – absolutely beautiful.
There is one player who I thought deserves very special mention. She was at the heart of all those marvellous orchestral backings for the singers. This was Alison MacDonald, the continuo cellist. What a performance! Her playing brought out the real greatness in Bach’s music throughout so much of the work.
Thank you everybody who took part in Sunday’s performance. Many in the audience gave the Stonehaven Chorus a standing ovation. It was well deserved!

Review written by Jennifer Macdonald
Secretary of The Stonehaven Chorus