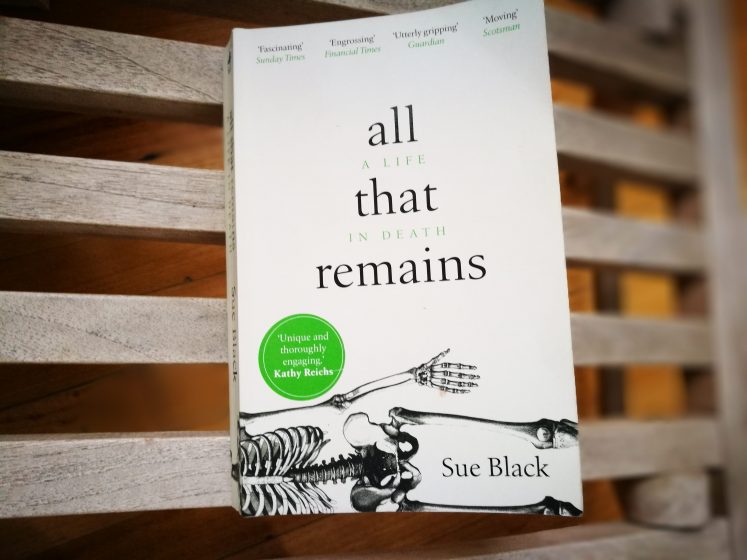 A BOOK about death written by a world eminent scientist who made Stonehaven her home is a current best seller.

All That Remains: A Life in Death by Professor Dame Sue Black was first published last year. It was greeted with critical acclaim and awarded the coveted 2018 Saltire Book of the Year. Now, the memoir by the forensic anthropologist and anatomist has been enjoying a spell on The Times top ten non-fiction listings provided by Waterstones.

Death is a lady by the way. We will all meet her one day.

Some years ago I heard Professor Black speak at a Mackie Academy prize giving. She described a trip to Kosovo where she had to identify the remains of a family who had been blown up and ultimately interred in a common grave by the sole survivor – the father. Eight children were among the dead. It was a very powerful speech delivered with utter humanity and humility. Professor Black made clear her desire to return the dignity of identity to the dead and give the comfort of their decent burial to that father.

The kind voice I heard in the assembly hall resonates from the pages of All That Remains, accompanied by something unexpected – a great sense of humour. For a book that features death, decay, dismemberment or dissection on almost every page, there are a lot of laughs and fond family memories, such as the tomato soup end of a favourite uncle.

Forget dodgy crime dramas, A Life in Death describes the strict protocols and techniques used to identify remains and assess time of death – or, sometimes more importantly, time of life. There is a lot of plain speaking with no attempt at making death pretty. Science is painted in easy, broad brush strokes so it is interesting not intimidating. Who would have thought scientists can tell what your mother ate when she was sixteen weeks pregnant from wee bones in your ear?

Each chapter of All That Remains reveals a different aspect of death as encountered by Black during a career that saw her develop a world leading Disaster Victim Identification training programme at Dundee University – drawing from events such as the Aberfan Colliery, Lockerbie and Piper Alpha disasters, and of course her harrowing time in Thailand following the 2004 tsunami.

And then there was her ‘A Million for a Morgue’ campaign to enable Dundee University to build a facility allowing new, much improved, preservation technique for cadavers. We are left in no doubt of the debt of gratitude felt to those who gift their remains to anatomical study – especially a gentleman called Henry, who allowed the then student her first experience with a scalpel.

Thoughts of her own death and beyond conclude Black’s memoir in exactly the honest, humorous and pragmatic tone she uses elsewhere. It is clear she has no intention to allow mere mortality to put an end to her efforts to contribute to the advancement of her science.

Dame Professor Sue Black is the Pro Vice-Chancellor for Engagement at Lancaster University. From 2005 to 2018, she was Professor of Anatomy and Forensic Anthropology at the University of Dundee. She was appointed Dame Commander of the Order of the British Empire (DBE) in the 2016 Birthday Honours for services to forensic anthropology.

All That Remains: A Life in Death is published by Transworld Publishers.