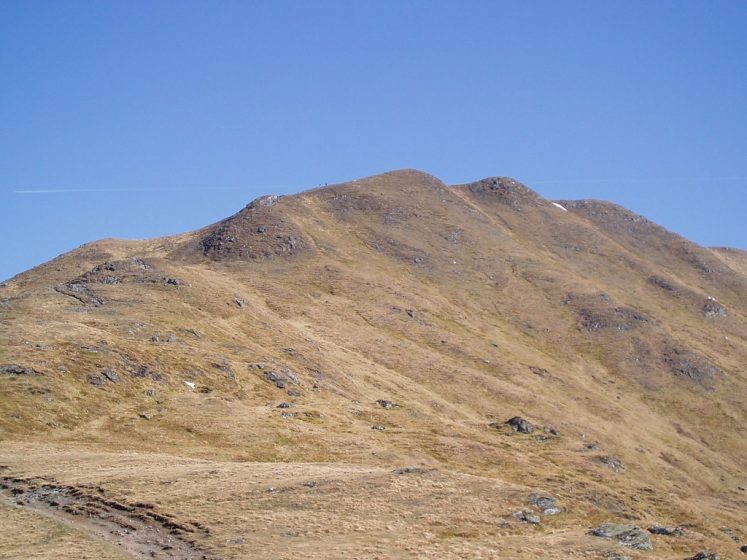 A great day out on the Lawers ridge was all but guaranteed when two of the Stonehaven Mountaineering and Hillwalking Club party were “blessed” by a seagull prior to leaving the Square at 7am. A few wet wipes later, all was well and we set out for the hills. With the usual military precision a car was deposited at each end of the day’s route, one in the National Trust car park and a second in the lay-by opposite the Lawers Hotel.

A short stroll along the road from the Lawers Hotel and over the Lawers Burn led to the start of the footpath to the hills. Skirting around the Horn Carver, we climbed towards the east end of the ridge. Following the right bank of the burn, we progressed steadily through sparse woodland towards the first hill of the day, Meall Greigh (1001m). Deep in conversation we almost missed the small cairn marking the point where we left the main path and climbed the steeper slopes to the munro.

From the top of Meall Greigh, the various tops and cols along the ridge could be viewed giving a feel for the task in hand. The morning mist had cleared although the highest summit, Ben Lawers, remained blanked in cloud.

After a short break to catch breath and take in the splendid views over Loch Tay, we headed towards the day’s second hill Meall Garbh (1118). A cool breeze had us diving into rucksacks for a layer to put on over t-shirts that had been the gear of choice so far. The 3 km walk to the second munro started easily but became a little more strenuous on the stiffer climb to the summit. Soon enough we were on the summit looking towards the more formidable east face of An Stuc (1118). By now the cloud had cleared from Ben Lawers and we were treated to clear views along the ridge.

An enjoyable steep descent led to the col from which it was just possible to see a faint path working its way up the steep face of An Stuc. With poles and jackets safety stowed away in packs, an energetic scramble over boulders and loose rock lead quickly to the summit. The token egg was rolled (and almost lost over the side) before being eaten for lunch.

Down off the summit and into the next col where there was a brief discussion about whether to call it a day and head back to the pub / car, take on the next two munros or go the whole hog and include Meall Corranaich and Meall a‘Choire Leith taking the day’s tally to seven munros. The unanimous conclusion was to push on to Ben Lawers and Beinn Ghlas leaving the final two summits for another day.

By now the wind had died away almost completely and a longer though pleasant climb led to the top of Ben Lawers. Splendid views were enjoyed on route including down to Lochan nan Cat and back along the ridge past An Stuc. At 1214, Ben Lawers is the 10th highest Munro in Scotland and at the time of writing, the 3rd most frequently climbed Munro (behind Ben Lomond and Ben Nevis and narrowly ahead of nearby Schiehallion according to WalkHighlands).

We lingered for a good while on the summit taking in the views and enjoying warm sunshine before descending the ridge and on to Beinn Ghlas (1103), the day’s fifth and final Munro. It’s hard to believe that an Easter Sunday walk in the high hills of Scotland could have been enjoyed with such pleasant warm weather. Whether the Stoney gull was responsible or not, all agreed it had been an eggcellent day out on the Perthshire hills.