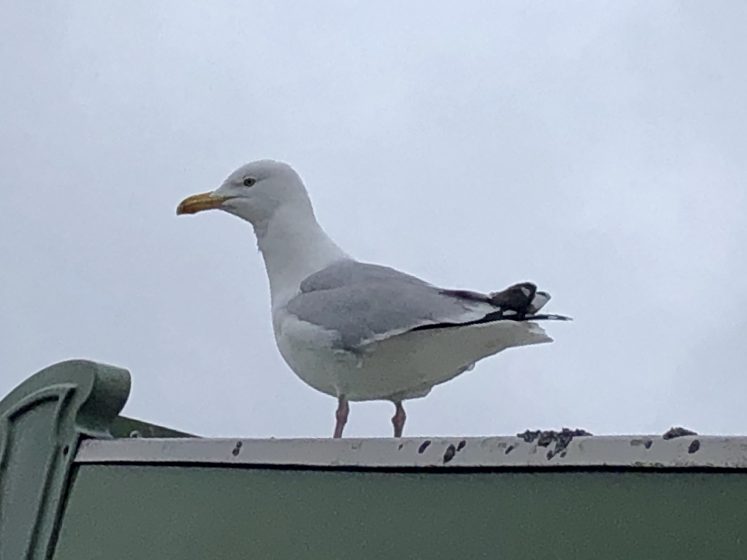 Communities around Aberdeenshire affected by nuisance gulls are encouraged to take action now if they want to have an impact in future years.

Spring is here and that means gulls, their nests and their chicks are starting to appear. Along with the theft of sandwiches, early morning noise and bird mess on cars and pavements.

Love them or hate them, their breeding season is beginning, and nowadays that’s often in our towns and villages rather than coastal cliffs, their natural home.

In recent years, Aberdeenshire Council has been involved in prevention activity in a number of towns, including Stonehaven and Peterhead, working together with the local community.

There are also plans to introduce control measures in Fraserburgh in future, again in conjunction with the local community.

But while it can support community efforts, ultimately the council has no legal powers to force owners to carry out preventative works, nor to undertake treatment during nesting.

It is reliant on the cooperation of owners and occupiers to firstly recognise the issue, then to take appropriate steps as early as possible.

The council takes action at many of its own properties, including schools and public buildings, where there is a need for it.

One of the most effective ways to have an effect, lessen attacks on humans and pets and lower noise levels on summer nights, is to target the birds at source – by preventing nesting and egg laying.

Now is the time to start thinking about carrying out preventative works to properties, particularly where there has been a problem with seagulls nesting in the past.

A range of non-lethal measures are available and members of the public can contact local businesses for help and advice on the most cost-effective solutions. These can include roof-mounted spikes or nets to deter landing and nesting.

“The council does not advocate the killing of gulls and their young, and so we encourage deterrents, preventative measures and nest and egg removal,” said Peter Argyle, chairman of the council’s Infrastructure Services Committee (ISC).

“It really has to be stressed that the council has no responsibility to carry out work at private properties and businesses, but clearly we support community efforts in some of the worst affected areas where we can.

“There can only really be any effect on nuisance gulls where communities recognise a problem and work together on the solution – to have a long term impact there needs to be a consistent approach over time.”

ISC vice chair, John Cox, said: “The council carries out a range of work in communities, which is a start, but this alone will not eradicate the issue of nuisance or aggressive gulls in our communities and we need all to contribute to the effort.

“We regularly receive complaints about gulls in our towns and villages, whether that relates to the noise they make, attacks on humans and pets or simply mess from their droppings, but people can start to claim their streets back from the birds.

“At a basic level this can mean being mindful of how litter and food waste is disposed of, but other measures, such as preventing chicks from hatching in the first place, are available, depending on the level of the problem. There has to be regional if not national policy to address an ever increasing problem before there is a serious incident.”

Nesting by gulls in communities normally takes place between April and June, but can happen much earlier in milder weather.