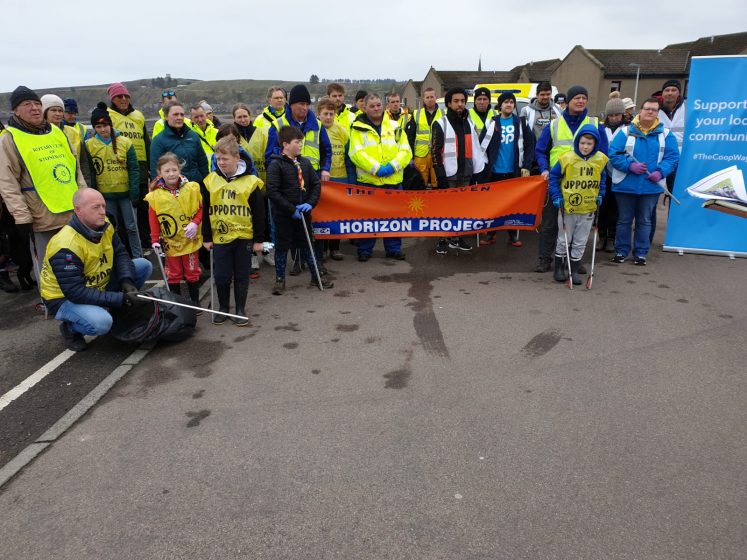 Many of the town’s groups were represented among the locals who attended: Stonehaven Lions, Rotary, RNLI, Coastguard, Paddle boarders, Surfers Against Sewage, Cubs, Guides and Brownies.

But not all the litter pickers were local – two American holidaymakers, who currently live and work in China, joined in with enthusiasm. John and Anne O’Connell flew in only yesterday from Chengdu, China where they both teach.

John said volunteer litter picks were unheard of in China where there is mandatory full employment – litter picking provides much needed jobs.

And Anne told of a Californian beach clean they had helped with some years ago, where huge amounts of debris from the 2011 Japanese tsunami was washing ashore – including some from the Fukushima Nuclear Power Plant.

Thankfully, there was nothing radioactive in today’s haul of about 20 bags of litter.

And, there were no nurdles -these small plastic pellets are about the size of a lentil. Countless billion are used each year to make nearly all our plastic products and they are found on beaches up and down the country. The volunteers had been asked to look out for them so a report could be made to a site monitoring their presence.

Horizon convenor John Cruickshank said, ” A huge thank you to all who turned up this morning to litter pick and sweep Stonehaven Bay.

“It was a great effort Stonehaven – thank you again – let’s keep Stoney tidy.”

Fantastic!! Well done everyone and good to hear that no nurdles were spotted!!