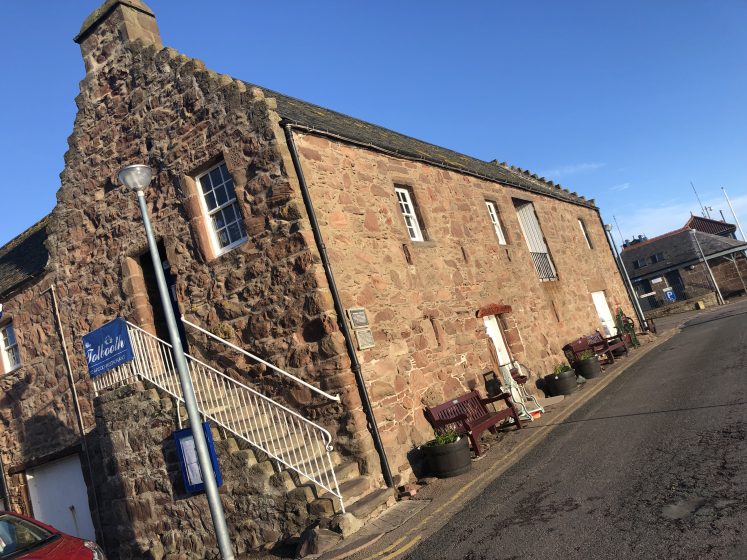 The Bellman reported recently on funding received by the Tolbooth from the North East Scotland Fisheries Local Action Group towards the predevelopment costs of an extension.

Andrew Newton has kindly provided the background to the museum’s planned iconic development.

The Tolbooth museum was run by the Council until March 2011 when, due to budget cuts, the decision was made to close the attraction permanently.

The local community decided that they would try to revive the museum and on 28th May 2011 it was re-opened by a number of volunteers with support from Stonehaven Town Partnership, Stonehaven and District Community Council and Stonehaven Heritage Society.

During 2011 the museum was opened initially on Fridays, Saturdays and Sundays (for three hours each day) with the intention to close at the end of the summer season. However, it quickly became apparent that visitor numbers warranted increasing opening to six days a week. It also became obvious that there was a demand from the local community and tourists alike to operate during the winter months. Accordingly, from October to March the museum opens on a Saturday and Sunday.

Official footfall figures from Aberdeenshire Council reveal that the annual recorded footfall was around the 9,000 mark when the museum was administered by the Council.

The volunteers have a greater degree of flexibility when compared to the Council’s Museum Service and they have been able to tailor the museum’s operations to more fairly reflect the demands of visitors.

This has resulted in a significant raise in the annual footfall  which is now running at just over the 24,000 mark. This has resulted in the Tolbooth museum being the most visited free attraction of all museums/heritage centres operating under the Aberdeenshire Council umbrella for the last three years.

This success, whilst very gratifying, has resulted in large crowds in the museum at peak times and consequently limitations on visitor satisfaction.

The volunteers realised that the only practical solution was to extend. In December 2017 they gained planning permission for a large extension. In order to obtain funding for the capital build it was necessary to employ consultants to drive the project forward to the build stage.

We are grateful that NESFLAG (North East Scotland Fisheries Local Action Group) have provided a 75% grant towards the total cost of retaining consultants. The consultants will be working in Stonehaven and engaging with the local community for the next 12 months as they prepare the necessary documentation required by potential funding organisations.