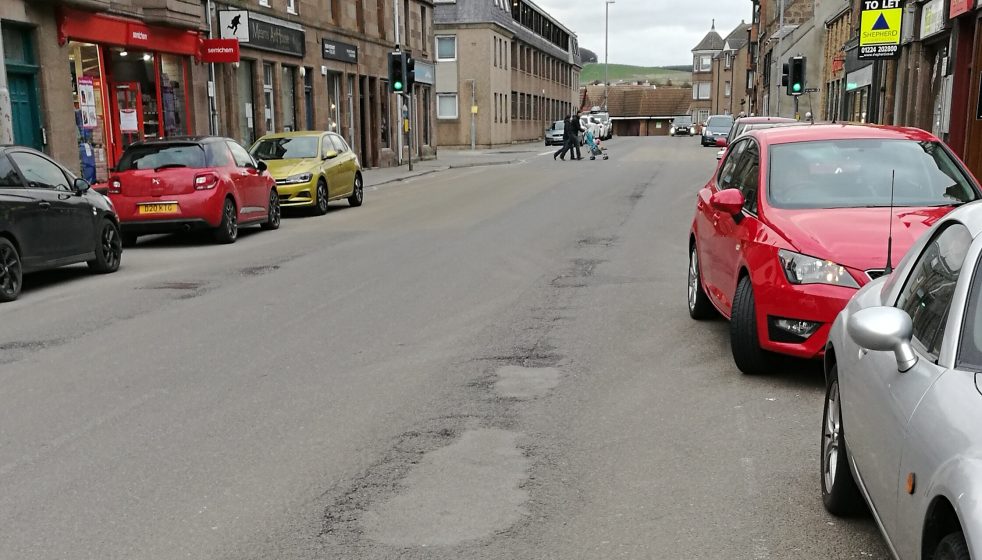 PLANNED resurfacing works to Allardice Street and David Street were welcomed at today’s meeting of the Kincardine and Mearns Area Committee – while a plea was made for the potholed promenade, which is not scheduled for repair.

Aberdeenshire’s infrastructure includes some 3,500 miles of carriageways, 995 miles of footways, 1566 bridges and 44,600 streetlights.

Ewan Smith and Ross Anderson of the Roads department presented a detailed breakdown of the works planned in the Kincardine and Mearns Area for the forthcoming year, which Mr Smith said had required a lot of analysis of competing schemes.

He said surface dressing was unpopular with drivers, but, “One of the most effective techniques for the maintenance of the life of a road.”

He later added surface dressing works would be undertaken in June to July, when the weather is reliable.

All of these areas are to have HRA inlay – removal of existing surface and inlay using Hot Rolled Asphalt (HRA) material – at a total cost of some £186,900.

Councillor Wendy Agnew said she was delighted to see these roads were to be done.

Councillor Sarah Dickinson raised the condition of the road at the beach front.

She said, “A low speed area can be a high visibility area. At the beach promenade, the quality of the road is very poor.

“Certainly there is never going to be a problem with speed. There is a reputation issue there, and that is an issue in a town like Stonehaven that has a lot of visitors.

Thank goodness something is going to get done, at least for some of the potholes. It seems to be problem for most of the roads in Stonehaven.

I’m curious, were any other Councillors present? Did they have anything to say?

I think all of the councillors of the Kincardine and Mearns Area were present as it was their three-weekly meeting. Certainly the four representing Stonehaven were all there.

In general, all the councillors made it quite clear that our roads department does a very good job with the resources they have and that it was a very thorough report they presented.

I think it was in this context that Sandy Wallace pointed out Aberdeenshire is consistently one of the least funded local authorities in Scotland.

Provost Bill Howatson asked whether the roads dept got many phone calls about pot holes. The officer said he had a matrix system that gave a priority for dealing with pot holes – any callers were given information about this approach.

There were comments made about roads outside Stonehaven – but I didn’t take notes as The Bellman covers Stonehaven only.

In Stonehaven, the only other comment I have in my notes and not in the above report, was Wendy Agnew mentioned a pot hole in Robert Street – it is to be repaired as part of general maintenance scheme.

If you are interested, the full report can be found here