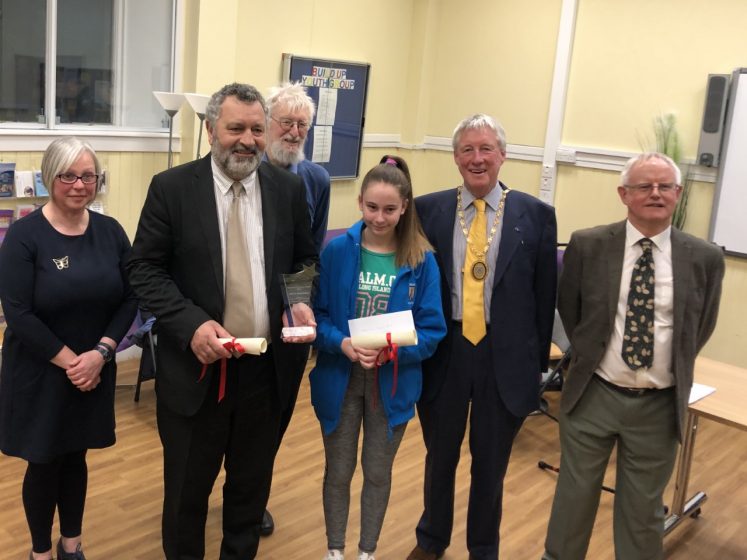 A YOUNG carer and a stalwart of Stonehaven’s Folk Festival and local quiz nights, were recipients of this year’s awards by Stonehaven Community Council.

Shannah Findlay was presented with the Hannah Dyson Award following a nomination by Mackie Academy principal teacher Duncan Whyte, who cited her friendly, supportive and conscientious nature in addition to her creativity, use of initiative and being proactive.

The S4 pupil combines her studies for National Qualifications with her duties as a carer.

Mr Whyte stated, “Shannah’s caring, empathetic and supportive outlook in this role also permeates every aspect of her school and wider life and Shannah always puts the needs of others before herself.

“Shannah has taken on positions of responsibility in school such as acting as a Junior House Captain and a Prefect and carries out both roles to a very high standard.”

He added, “Her application to her academic studies, success in a leadership position in school and the positive influence she has on the school community when placed in the context of Shannahs caring role at home, are the reasons that I am nominating Shannah for this award.”

The Hannah Dyson Award commemorates the popular teenager from Netherley, who died in 2005 after a long battle with cystic fibrosis. Meanwhile, a man who has contributed his time and good humour to local fundraising efforts and events  was this year’s recipient of the Community Award, given by the SDCC in conjunction with the Business Association and the town’s churches.

Martin Kasprowicz was nominated by both the Folk Club and by weekly quiz goers who have, for years, enjoyed his sense of humour and tireless efforts towards these and other events in the town. Mr Kasprowicz is a regular compere at the Folk Festival and the Feein’ Market, and organises an annual Big Quiz for local charities.

Folk Club chairman Andy Popplestone stated, “Over the years Martin has helped the club raise thousands of pounds for local charities through his regular contributions to the annual fund raising Cabaret nights. Although no longer involved in the organisation and running of the club, Martin is a generous supporter and gives freely of his time and extensive resources to help the club run smoothly.”

He added, “Nothing is too much trouble.”

The awards were presented by Provost Bill Howatson, who said, ” They are to let you know how much you are appreciated.”

Mr Howatson said the recipients were excellent examples of community support, and he was very impressed with the broad range of activities they take part in.

He added, “We want you to know your selfless work is valued by the people of Stonehaven.”