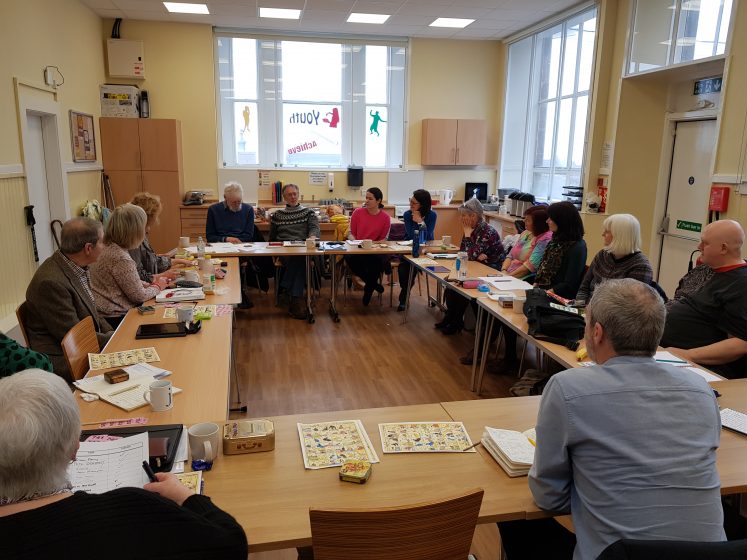 Guest writer was poet John Glenday who led a stimulating morning session utilising a variety of resources to prompt a creative response. John Glenday who is resident in Carnoustie is the author of four collections of poetry. ‘Grain’ was shortlisted for the Griffin International Poetry Prize and the Ted Hughes Award. ‘The Golden Mean’ was shortlisted for the Saltire Scottish Poetry Book of the Year 2016 and won the 2016 Roehampton Poetry Prize. It was agreed by those present that the session was very effective.

The afternoon session was led by group member Olga Moroni who encouraged those in attendance to explore an issue of importance through utilising contradiction. This too was a highly productive session.

Sandy Inglis, Chair of Mearns Writers, said that the writing group had a number of these sessions throughout the year, sometimes using Live Literature Funding from the Scottish Book Trust to gain the services of established writers and equally often making use of the talent available within the group to have in house workshops.

Mearns writers meets twice weekly, in Inverbervie on Monday evenings and in Stonehaven on Thursdays. The group has now been in existence for more than eleven years and there are up to thirty local writers associated with it.

Alistair Lawrie who leads the group’s weekly sessions said, “These workshops are wonderfully useful in keeping a creative spirit alive. Our next Workshop is at the end of March and has as guest Chris Longmuir, the crime writer.”