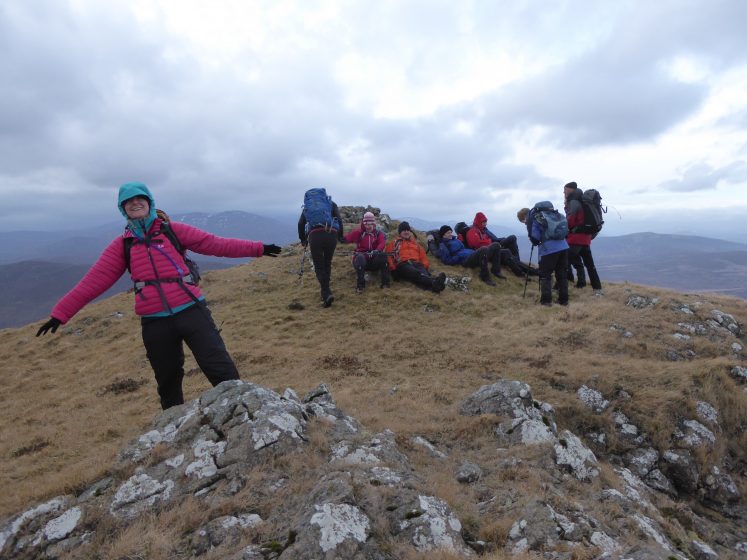 STONEHAVEN Mountaineering and Hillwalking Club’s February walk was to be their annual ascent of Lochnagar to commemorate the Club’s first ever outing in February 1978, which was to this venue.

This annual event, subject to the vagaries of winter conditions, has met with varying degrees of success over the years. The forecast for the day was for 50+ mph winds. So as members gathered at Glen Muick car park those older members who had “been there got the T shirt” were casting doubt on the wisdom of proceeding with the original plan.

By the time the last car arrived it had been agreed to look for a lower alternative. The Coyles of Muick (601m) was eventually agreed as suitable but which unfortunately involved a drive back down the glen.

The proposed route commences a few kilometres west of Ballater on the South Deeside road close to Loch Ullachie. A landrover track climbs steadily south west through trees before breaking out onto the open moorland where it reduces to a well-used path, testimony to the popularity of this fine little hill, well seen from the A93 on the approach to Ballater from the east. The path more or less hugs the west edge of Alltcailleach Forest  before the final climb to the summit and crosses Carn a’ Bhealaidh (456m) on the way.

A large herd of red deer was observed on the slopes of Glen Girnock as a short detour was taken on the way up to take in Meall Dubh (563m) which sports a well-constructed howff (shelter) on its south east flank. By now the strength of the southerly wind was beginning to manifest itself and many of the group took opportunity of the shelter provided by the howff and a nearby crag to take a comfort break while a few others headed down to the tree line to shelter there.

Interestingly a mountain biker cruised past and headed up to the summit and back down without dismounting. Finally, club members made the final quite steep ascent to the double summit of The Coyles of Muick, the higher of which supports a couple of large cairns. The wind by now was very strong making remaining erect quite difficult and reinforcing the decision to give Lochnagar a miss which, in any case, had been in clag all day.

After a short break a return by the way of ascent was made as far as the col between The Coyles and Meall Dubh before disappearing into the Forest where a modern “bothy” is located, presumably there for shooting parties, the guests of Balmoral Estate. Unfortunately, it was locked, but in a sheltered enough spot to take sustenance.

Refreshed the group set off through the open woodland to ascend Craig of Loinmuie (540m) where once again the strength of the wind was felt. An attractive descent through open woodland followed to reach a landrover track contouring round a corrie before slowly descending through the trees to the start of the day which was rounded off with a high tea in the Station Hotel.