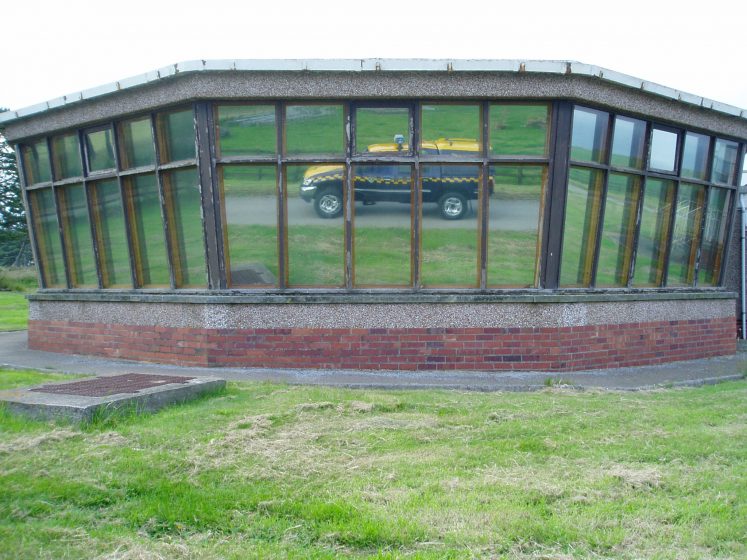 We are very grateful to Deputy Station Officer at Stonehaven Coastguard, Graham Mitchell, for the following article about Stonehaven Radio “GND” which closed on 30th June 2000.

In its day, it was famous around the world.

Stonehaven Coastguard have a garage at Cowie where they keep their 4×4 vehicle and all rescue equipment. There are 10 in the team, all volunteers.
Stonehaven Radio was run by BT, separate from the Coastguard.

On 17th May, 1942, to improve the distress coverage of the North Sea, a wartime station was opened about two miles south of Stonehaven, Kincardineshire. Situated 300 feet above sea level and immediately above the ruins of Dunnotar Castle, this station of temporary wooden huts, all carefully lashed down to withstand the N.E. gales of the Scottish winters, played its part throughout the war and continued to do so in the post war years.

The continual growth of commercial traffic then made it apparent that a larger, modern station was required and the present building was completed and opened in January, 1958. It is a long, low, flat-roofed building with the Operating Room at the southern end constructed almost entirely of glass. With its squat chimney at the northern end and its two 120 feet lattice steel masts, it bears a close resemblance to a vessel itself and is a conspicuous landmark from the sea. Equipped with three operating consoles, transmitters and associated radiotelephone, and landline equipments, the station provides services in the 2 Mc/s radio-telephony band and in the 2 Mc/s and medium frequency radiotelegraphy bands.

Eleven ex-marine radio officers, working on irregular shifts (a typical week consists of two day duties, two evening and two night duties), maintain a continuous watch on the 500 kc/s and 2182 kc/s distress frequencies. Three men are on duty during office hours, when a watch is also maintained on the ship/shore radiotelephony calling frequency of 2381 kc/s.

Naturally, distress working takes precedence over all other activities and on receipt of a distress or urgency call in our area, the details are immediately re-broadcast on full power on both W/T and R/T. At the same time the Sea Rescue authorities, which comprise Coastguard Aberdeen, Admiral Rosyth and if necessary, the Air Rescue Co-ordination Centre at Dunfermline are advised. Additionally, we inform Lloyds London and the local agent in Aberdeen. From then onwards, we act as the link between the casualty and the rescue authorities, relaying all reports on the development of the casualty and the progress of rescue operation. An international rescue co-ordination organisation exists and, if necessary, assistance from European counties bordering the North Sea can be quickly obtained by telex to supplement the help which our own rescue authorities are able to summon. watch is also kept on casualty cases handled by Farsund Radio, Kristiansand Syd and Thyboron Radio and our own rescue authorities are kept fully advised of progress so that should assistance from this county appear necessary, it can be speedily supplied. During the past 12 months, Stonehaven Radio has participated in27 distress or urgency cases.

The treatment of accidents and illness at sea are not nowadays solely dependent upon the medical skill and knowledge of the Mater or steward of the vessel. Today, we can connect the ship direct by telephone to the doctor on duty at Aberdeen’s large casualty hospital for advice and if necessary, arrangements can be made for the doctor to be taken out by lifeboat or helicopter.

Fortunately, however, the daily routine does not consist of a succession of casualties or emergencies. Shipping is kept advised by routine transmissions on W/T and R/T of the weather forecasts for the next 12 hours for Forth, Cromarty and Forties, of Gale Warnings, interrupts to Decca transmission and dangers to navigation in these sea areas. Information regarding floating obstructions, buoys out of position, lights extinguished, radio beacons not working, etc. should all be reported in order that remedial action can be taken and other shipping advised.

The major part of the operators’ duties is concerned with the handling of commercial traffic. Approximately 1,300 vessels communicate with Stonehaven each month; tankers from and to Grangemouth, cargo vessels, coasters and colliers for Aberdeen, Dundee and Leith, deep sea trawlers for White Sea, Greenland, etc., and today, and increasing number of the local inshore fishing vessels. Messages received on either W/T or R/T can if the addressee is a telex subscriber, be delivered direct within minutes of receipt at the station. For non-telex addresses, we have to utilise the inland telegraph network and forward the messages for disposal by telephone or messenger which naturally takes longer. Similarly, the delay on messages to ships is dependent upon whether the sender uses telex or the inland system.

In the early days after the war, the number of radio telegrams handled far exceeded the number of radiotelephone calls. It was not uncommon for homeward bound Hull and Grimsby trawlers to send batches of 20 or more telegrams advising friends and relatives of their ETA. Nowadays, like everyone ashore, the trawler men prefer to telephone. Foreign going vessels too, are turning increasingly towards the radiotelephone as being a so much more convenient, speedy and satisfactory method of conducting their business with owners and agents. In the last ten years, the number of radiotelephone calls handled has more than doubled and now number approximately 12,000 a year. During office hours, one man is almost continuously engaged at this radiotelephone position and with our direct connections to the Aberdeen Trunk Exchange, the ship is connected to the Shore subscriber with the minimum of delay. Calls vary from the purely business call of the Master to those covering every kind of social activity and greetings from all members of the crew. Nor are they confined to subscribers in the United Kingdom alone, extension can now be given to most of the European countries and several Extra-European ones – services which are gradually becoming more popular.

Until a few years ago, the vast fleet of inshore fishing vessels which operate off the Scottish coasts made little use of their radio-telephone equipment for business purposes, but more and more, realising the great advantage it gave them to know the state often market at each port and to have shore staff ready for their landings, are now regular communicators. This increasing interest is encouraged by the staff at Stonehaven by periodic visits to the main fishing ports to discuss the difficulties encountered by the Skippers and to help them improve their radio knowledge. Serious interference to our link call service has so often in the past been caused by the mis-use of the ship/shore frequencies for internship working by a minority of these men.