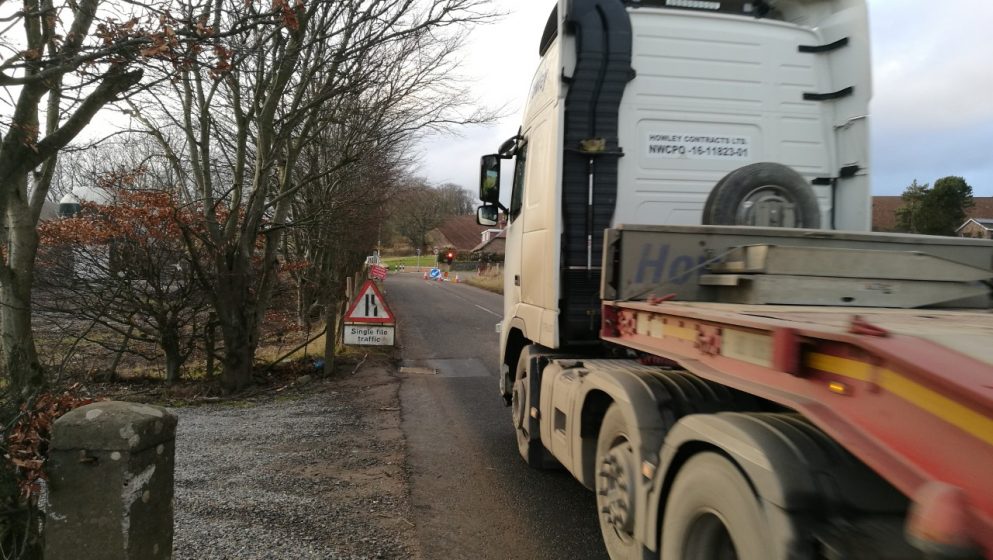 WITH yet no pavement access completed to the homes already built at Ury Estate, members of Stonehaven and District Community Council grilled attending Aberdeenshire Councillors for an explanation and called for the council to reinstate the taxi service operated by the AWPR contractors.

When permission was granted for 230 houses at the east lodge, it was on condition of the provision of connecting pavements – yet due to delays caused by the AWPR works, the walkway is not yet in place.

At Tuesdays meeting  of SDCC, Mike Duncan asked whether it was even possible to deliver a safe path.

Councillor Sarah Dickinson said there had been ‘factors to resolve’ with the pavement. One of these was the difficulty in fitting in a walkway of the usual width. The one to be constructed was likely to be 1.2m wide instead of the usual 1.5m. She added the work was due to start in April.

“This is very close to being resolved,” she said.

Councillor Dennis Robertson added his colleagues were are not happy and had asked for some kind of safe corridor for pedestrians, perhaps using tall cones to delineate it.

And Councillor Wendy Agnew said she had been approached by householders and had looked into if part of the Mains of Ury Farmyard could be used. There are also concerns about increased traffic once the flood prevention works get underway.

SDCC members were not satisfied with the responses.

Ian Hunter said, “How on earth can you think about building an estate without thinking about how people can walk to the town?”

Mike Duncan said, “There is significant danger. Someone could be killed there.”

Alistair Lawrie said, “It is like Picadilly Circus. A council officer has acknowledged it is dangerous. Could they not alleviate that danger, or, as the AWPR did, pay for taxis?

He added, “This is your work. There are ways of safeguarding people as the AWPR did. It is incumbent on Aberdeenshire and its officers.

“We are gambling with people’s lives.”