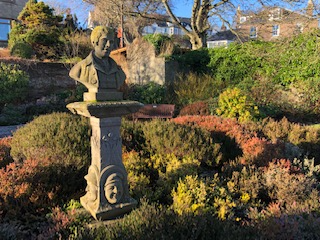 I thought you may be interested to hear of a recent Stonehaven adventure.
You will be aware that the Stonehaven area is the homeland of Robert Burns’ father, William, who was born in the Mearns in 1721. He moved to Edinburgh in 1748 and latterly on to Ayrshire where he married Agnes Bourne who gave birth to the poet Robert on the 25th January 1759.
We do also have an active Club here: Stonehaven (Fatherland) Burns club. Anyway, my wife was sure the town had two statues of Robert Burns and we went to track down the ‘other’.

Even as we found it, tucked away in the corner of a front garden, we bumped into the householder, Lesley Hampton.
She spoke of her home and its family connection, the bust in her garden of Robert Burns, and the gargoyles on her house.

Lesley’s home was built in 1901 by her great great uncle, Robert Taylor, a monumental mason, who was known locally as ‘Ghostie Bob’. As he had a passion for Burns, he adorned the gable ends of his home with heads, gargoyle style, of Tam O’Shanter and Souter Johnnie – as well as sculpting the bust of the Bard for his garden.

Lesley told us the Robbie Burns bust along in the Burns Memorial Garden is in fact a copy of the one in her garden. It was commissioned by an American tourist, who had spotted and admired the original. He never returned to collect it though and the stone mason was unpaid.

Undaunted, Ghostie Bob, who was a leading light in The Burns Fatherland Society, gifted his unpaid-for work to the town. The Burns Memorial garden is at the foot of Belmont Brae (next to Kwik Fit).

What a coincidence. I was looking in puzzlement at the first statue in the person’s garden just this morning, and wondering whether somebody had nicked from the Burns Memorial garden beside Kwik-Fit!! The Bellman – first for information!!!

And now you know about Ghostie Bob and can spot his gargoyles too!

It was a lovely story and we really enjoyed our chat with Lesley.